The Animals’ Agenda: Freedom, Compassion, and Coexistence in the Human Age by Marc Bekoff and Jessica Pierce is an important and timely book that examines the human relationship with — or, more accurately, examines the many ways in which humans use — animals and how this relationship needs to evolve. This book asks readers to rethink how we see animals and to adopt more compassionate practices toward them, from animals used for food and entertainment to those in the wild. 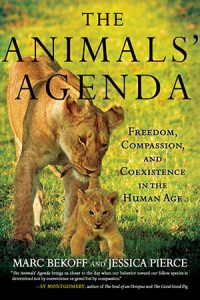 If this book has one message that we all need to hear, it’s that animals in our society suffer abuses that we currently accept as normal — the hope is that one day we will all see these practices as barbaric instead of acceptable or necessary. The authors argue that humans are indeed aware, on some level, of these abuses but are not taking steps toward actually preventing them. Most people still eat animals, still visit zoos, still hunt and fish. “We offer lip service to freedom, in talking about ‘cage-free chickens’ and ‘naturalistic zoo enclosures.’ But real freedom for animals is the one value we don’t want to acknowledge, because it would require a deep examination of our own behavior…Many animals live impoverished lives because of our desires or our lack of awareness.”

The Animals’ Agenda shows how, despite studies that prove the intelligence and emotional sensitivity of animals, nothing will change until humans accept this suffering and choose to stop supporting it — by not attending zoos, for example, or by not eating or wearing animal products. They compare the reality of standard, accepted animal suffering to Al Gore’s An Inconvenient Truth: “The truth of animal feelings is similarly inconvenient, in that it challenges our highly profitable animal industries and our personal habits.”

The book is organized in sections that tackle the ways in which animals are at the mercy of humans, including farmed animals, animals in labs, pets, and wild animals. Among the most important points the authors make is that so-called improvements in the treatment of animals as a result of animal welfare studies actually do more harm than good because they let people off the hook by allowing them to believe the animals don’t suffer as much as they actually do. One powerful example is in the work of Temple Grandin, who “is hailed as a compassionate helper of animals while at the same time working within a venue in which billions of animals are harmed and killed…she has done more than anyone else to deflect attention from real freedom for animals. Even if a few animals are getting a ‘better life,’ it surely is not a good life.”

And this is the main point of The Animals’ Agenda: that non-human animals deserve the freedoms we human animals enjoy. And yet no non-human species comes even close. Even farmed animals who are fed and housed (allowing people to believe they are “cared for”) have no freedom whatsoever: “They are confined to small cages or crates, or else they are packed into a large space with so many others of their kind that physical movement is highly constrained…They have little to no control over social interactions and attachments.” Most of their diets are so unnatural to them that the animals feel hungry all the time, even when they are fed. And lest you think that “free-range” animals have it better, read on; as the authors show, “Humane is a dirty little lie.” Methods of castration, for example, that are “animal welfare approved” by the United States do not require anesthesia. And readers will be shocked to read of the terrible conditions and abuses that occur at AZA-accredited zoos.

One chapter of the book is devoted to companion animals and points out “how little research has been directed at the welfare of animals kept as pets, either in the home environment or in pet stores and breeding facilities.” Yet instead of focusing on ways to end the breeding and sale of animals, the authors focus on “exploring freedom and preferences in relation to our most common animal companions — dogs and cats” — despite their acknowledgment of the dearth of research. There are many good points in this chapter — the ills of the wholesale pet industry, the lack of knowledge most humans have about the needs of their pets — but by advocating for greater freedoms for companion animals, the authors do a disservice to shelter pets and their humans. While they acknowledge that “as companions of dogs, we can do our best to balance necessary constraints against as full a measure of freedom as possible,” they actually advise against keeping cats indoors (not mentioning exceptions for such circumstances as FIV-positive or declawed cats): “Depending on location, cats may have to contend with busy roads, with predators such as coyotes or cougars, with humans who have bad intentions, and with the possibility of injury or disease. But as with our children, we cannot protect them from all risk…Letting cats outside may be what ethicist Bill Lynn calls ‘a sad good,’ a good that involves an element of moral risk and harm.”

The fact that this book advocates so strongly for animals in other ways makes this chapter on pets a liability, as it risks derailing the book’s entire message: If readers think it’s okay to allow their cats to face injury, disease, and death from traffic or predators, why should they attempt to avoid causing such harm when it comes to farmed animals or captive animals in zoos? Many animal-rights activists would agree that keeping pets is something that humans should eventually give up — but until every last animal shelter is empty, these animals need to be adopted, loved, and protected. Companion animals deserve freedom the same way dairy cows do, but whereas the life of a dairy cow is a daily torture, most pets are not being tortured simply by being kept inside homes or behind fences for their own safety. Even a free dairy cow would presumably fenced in at a sanctuary, not left out on her own. It’s this chapter, in an otherwise stellar book, that may make it hard for non-activists to embrace the idea of animal freedom.

The Animals’ Agenda goes on to note the ways in which even wild animals, on both land and in oceans, suffer due to our influence — from habitat loss to our noise to our trash — and that even conservation work, such as capturing and tagging animals, has its own negative effects. Education is key here, and the authors’ message is clear: “a great number of things we currently do to animals are simply wrong and need to stop: the unnecessary slaughter of animals for food and fur, the use of animals in invasive research, the confinement of animals for human entertainment, and our excessive encroachment on wildlife.”

While Bekoff and Pierce detail the good science that is happening regarding animal welfare, they also note that we must “close the knowledge-translation gap”; in the end, much of this knowledge primarily serves the industries that abuse animals. For things to improve, for us to put “what we know about animals into the service of animals themselves,” it will take nothing less than a compassionate society to adopt a mindset of true animal freedom. A very good first step toward that is reading this book.