In Lion Hearted: The Life and Death of Cecil & the Future of Africa’s Big Cats, lion researcher Andrew Loveridge recounts his work studying prides of lions living in Zimbabwe. From his initial research on jackals, to the inception and evolution of the lion research project to assess the impact hunting has on lion populations, this is a great exploration of Loveridge’s work over the years. I highly recommend it to lion lovers and wildlife enthusiasts. I caution readers not to be misled by the title though. Do not read this book expecting all of it to focus on Cecil. Cecil is introduced in the prologue, but he is not mentioned again until page 191. This book is more about Loveridge’s lion research, which is fascinating. It has made me reconsider what I thought I knew about lion conservation and the role hunters play in it. 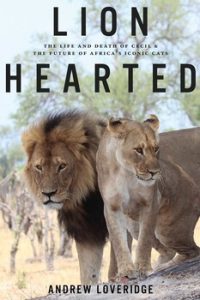 Lion hunting is legal in Zimbabwe when you have the right permit. This is made clear right from the beginning. Lion hunts bring in a lot of money. Unfortunately, the distribution of the money to locals to support the economy and relieve the impacts of lions living and hunting around their communities, does not often happen. Conservation organizations do not see much, if any, of that money either. Which raises the question of whether hunting really does help conserve animals. During his research, Loveridge lost many of his study animals to hunters and the impact of their death was felt deeply. “To the hunter, no matter how exciting the hunt, this is just another lion. He would have no idea, as we did, of this animal’s amazing life story” (p. 88).

Loveridge discusses his time exploring the trophy hunting industry while attending a hunting conference in the United States where he hoped to persuade hunters of the importance of saving lions. “As much as conservation is promoted, the industry is really about business and money, and the buying and selling of animals. It is a hugely lucrative industry that believes its own propaganda on the primacy of hunting in conservation. It does not want to change” (p.100).

The show involved in conducting lion hunts was not something I had considered previously, from getting a hunter to purchase a hunt at large hunting shows to the reality of a hunt. “It seems obscene that an animal should die just to bolster the ego of a rich Westerner who wishes to adorn his home with a woodenly taxidermied replica of a creature that was once lithe and vibrant. Lion hunting is not particularly challenging or dangerous. Big cats are commonly shot by luring them with bait and shooting while they feed” (p. 243-244). The people who guide the hunters to the lions help play it up for them and celebrate kills. Videos can be made as well. But can hunters who shoot a lion that is eating really feel like they have accomplished an heroic kill?

Loveridge emphasized the impact of the loss of a lion on its pride throughout the book. Whether it is a male or a female it can be huge. When males are killed the group of females are left open to a take-over by another male. When a new male arrives it kills all the young lions in a pride. Frequent turn-over of the male lions due to hunting creates a situation where it is really hard to raise young lions to maturity and can cause prides to shrink as older lions die.

There were several aspects of the book that I found distracting, in addition to the focus on Cecil in the title. The book starts with some attention grabbing stories about the immense force of lions and crocodiles and the terror they can cause, which seemed out of place considering the focus on lion conservation. It made me wonder if the intent was to draw in readers by playing into the public’s interest in ferocious beasts. Later stories, discussed within the context of lion behavior when lions move close to villages, melded well with Loveridge’s research, and showed their force without playing into the ferocious beast mentality. These stories were not as distracting since they flowed with the context of the book.

Many chapters also started with one story, and then told another story or two before coming back to finish the first story and end the chapter. I found this a little confusing for two reasons. First, as a mom I cannot always read a whole chapter in one sitting, so by the time I get to the end of the chapter I needed to review some of the material from the beginning of the chapter to refresh my memory. This was also distracting because there are a lot of lions that Loveridge has studied, over 700, and many people who have worked with him, so remembering all the names and relations gets confusing if you break up a story with another story.

The book ends with the details of Cecil’s death, clarifying multiple points the media got wrong, and analyzing why the death of that lion, as opposed to many previous lions, received so much attention. Loveridge even questions how Cecil’s name contributed to this. It made me wonder about the similarities between Cecil’s death and that of Harambe the following year at the Cincinnati Zoo. When the death of an animal causes so much outrage, we need to harness that energy to save the animals still living in the wild that need help now. For lions, Loveridge suggests it may come down to reducing human-wildlife conflicts and ensuring lions have access to enough uninhabited areas, and areas that are unobstructed so they can travel between those open spaces.

Overall, I found the book to be very interesting. I learned a lot about lion behavior, as well as lion hunting and the trophy hunting industry. I encourage you to read the book and find your own way to get involved in lion conservation. Visit the Wildlife Conservation Research Unit website to learn more about Loveridge and other conservation work they are doing.