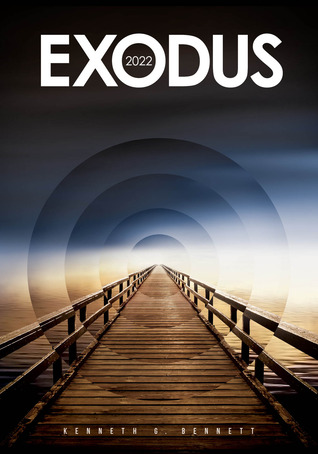 Exodus 2022 by Kenneth G. Bennett (author of the young adult novels, The Gaia Wars and Battle for Cascadia), succeeds nicely as an eco-lit foray into the thriller category set in the Pacific Northwest. It follows genre conventions well by moving along at a nice clip, ending each short chapter with a hook, and teasing the reader along with mysterious circumstances.

It has some of the weaknesses of the genre too: scenes tinged by melodrama, nonsensical violence and thinly drawn characters. Antagonist Sheldon Beck is inexplicably evil for much of the book, with some explanation provided later, but which distracts from the storytelling.

The book starts in medias res with the main character’s traumatic mystical experience which leads the people around him to think he’s either mentally ill or on drugs. It’s a tough introduction for the reader, too. Also, would San Juan Island residents be so uncharitable to a guy in mental distress? Could be the drama was all too real, but it didn’t sit well on the page.

For awhile the relationship between our protagonist, Joe Stanton, a nice guy Episcopal priest, and his girlfriend, Ella Tollefson, a nice gal nurse (described as simply beautiful, perhaps, too often) felt flat, but it was redeemed in Chapter 33 with a key bit of exposition.

There’s a well-rendered scene where Joe and Ella meet and, thereafter, the connection feels genuine. These quiet contemplative moments where the book diverges from the driving action are its best. The couple meet while volunteering on mountain trails: Joe with his church and Ella with the Washington Trails Alliance.

Joe is enjoying a night in the woods

He was aware of the rush of the creek. The murmur of the wind in the trees. If he tilted his head back, or side-to-side, he could see the forest— a dark, impenetrable wall against the luminous, mysterious sky.

He lay there, lost in thought, feeling deeply content. Alive.”

Then Ella interrupts him and they begin a conversation that continues until morning.

Truly, this book hits its stride in its “Love of Earth, sea, and sky” — a strong theme — and is at its best where it defies convention and dives into eco-lit territory. It takes the classic thriller terrain of spies/corporations/military assaults and the supernatural, blends them and adds an intriguing ecological twist.

And then it gets weird.

Read this for a thriller with eco-consciousness and heart, as a summer read for nature lovers, to accompany travels or a backpack trip in the Northwest, and, certainly, as a novelty.

What next?
Pairs well with The Awareness by Gene Stone and Jon Doyle (look for a review of this novel here in June) and the documentary Blackfish.

Inspired by this book?
Check out Washington Trails Association and People for Puget Sound.