Paul Shapiro’s book Clean Meat: How Growing Meat Without Animals Will Revolutionize Dinner and the World explores the fascinating — and potentially planet-saving — world of cultured meat. 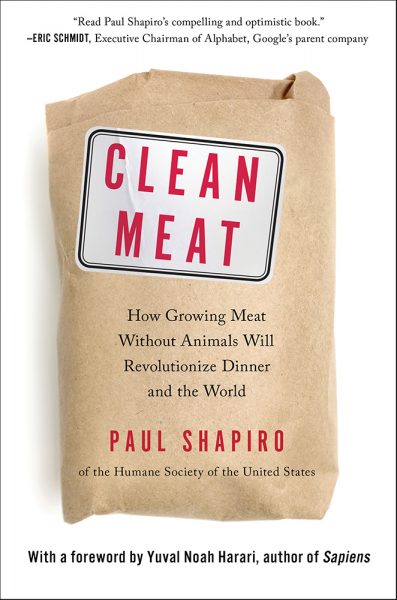 While the notion of “cultured meat” or “lab-grown” meat may sound odd to many, Shapiro’s book makes the case for why this new industry is among our best hopes for, quite literally, saving the world. He notes, “Our species truly is at a crossroads. It’s not hard to imagine the global instability that could ensue when we have billions more people on the planet, including billions more who expect to eat meat regularly. We just don’t have the resources to satiate that demand without destroying our planet and inflicting an enormity of suffering on animals, both domesticated and wild, in the process.”

As a decades-long vegan and the founder of Compassion Over Killing, Shapiro, who has also served as a vice president for the Humane Society of the United States, knows firsthand what’s at stake, and in Clean Meat he takes us behind the scenes of those who are about to change the world for the better.

As Yuval Noah Harari notes in the book’s foreword, “The world’s animals are not the wildlife we think of when we think of animals.” Rather, most animals that exist on the planet are bred for our consumption. For example: There are forty thousand lions in the world to one billion domesticated pigs, fifty million penguins to fifty billion chickens—and for these animals, life is horrific: “Judged by the amount of suffering it causes, industrial farming of animals is arguably one of the worst crimes in history.”

Cultured meat is the answer not only to the problem of animal suffering but to the issue of greenhouse gases produced by animal agriculture (responsible for more greenhouse gases than all forms of transportation combined); the massive water consumption required (“you’d save more water skipping one family chicken dinner than by skipping six months of showers”); and the destruction of rainforests to raise animals (“animal feed is the leading cause of rainforest deforestation, essentially killing the lungs of our planet”). In Clean Meat, Shapiro writes about start-up pioneers who envision “a world in which we can have our meat and eat it, too: where we can enjoy abundant amounts of meat and other animal products without all the environmental, animal welfare, and public health costs.”

Shapiro details the fascinating science behind cultured meat as well as shows us the history of meat consumption in the U.S. and other countries, and why it’s becoming unsustainable.The science of clean meat is explained in both technical and layman’s terms, which makes the industry’s concepts accessible to all readers — and the sections outlining the technology are remarkable, showing us how real animal products such as meat and leather are being produced from microscopic animal cells, and even from yeast, bacteria, or algae.

The book also demystifies many of our perceptions of cultured meat (one major point being that clean meat is not as wild an idea as we think because nearly all the food we currently eat is scientifically engineered, from packaged foods such as protein bars to vegetables and fruits such as seedless watermelon). In addition, the very term “clean meat” reflects the improved food safety of these products; whereas meat from animals raised on farms contains antibiotics, hormones, fecal matter, and diseases such as avian flu, cultured meat, which is produced in a completely sterile environment, will be far safer to eat than the meat being produced today. “Imagine choosing between an egg white that might have salmonella and one you know doesn’t,” says Arturo Elizondo of Clara Foods. “Or milk with pus versus milk without pus, which all cow’s milk has. Which would you choose?”

Perhaps most surprising is that the concept of cultured meat is not as new as it seems; as far back as 1931, Winston Churchill wrote of “the absurdity of growing a whole chicken in order to eat the breast or wing” — and even he was not the first: “As early as 1894 … French chemistry professor Pierre-Eugène-Marcellin Berthelot claimed that by the year 2000, humans would dine on meat grown in a lab rather than from slaughtered animals.” Shapiro outlines our history of attempting to improve the way we eat, from hunting and foraging to culturing such foods as beer and yogurt, and how technology has brought us to where we are today. In the pages of Clean Meat, we meet scientists, idealists, and businesspeople, all working toward bringing this science to the mainstream. Having met representatives from many of the companies in this emerging field — among them Memphis Meats, Modern Meadow, Hampton Creek, Mosa Meat, Finless Foods, SuperMeat, Future Meat Technologies, Perfect Day, Clara Foods, Bolt Threads, VitroLabs, Spiber, Geltor, and others — Shapiro notes, “Interestingly, for the most part they don’t consider one another rivals as much as they do friendly competitors, all working toward the same goal.”

As with any major disruption in our social, cultural, and economic lives, clean meat will have a tremendous impact on everything from jobs to food to animal welfare, and in the end, it will likely succeed if it improves the lives of humans. As Shapiro points out, much of animal protection is accidental — whaling only stopped in the mid-nineteenth century because kerosene was discovered to be a better and more affordable alternative to whale oil; horses were replaced with cars only thanks to Henry Ford’s innovation, not animal advocates (though wonderful advocates did exist, they were not the reason Americans exchanged horses for cars).

So there is reason for hope for clean meat, especially “given that mainstream meat consumers (i.e., most people in our society) rarely think twice about buying meat from animals who’ve been raised in unsanitary and inhumane conditions … it’s difficult to imagine most of us having a problem with clean meat that (aside from being safer, eco-friendlier, and more humane) is pretty much the same meat that we’re used to eating.”

The biggest question of all — how does it taste? — will ultimately be answered by consumers themselves. As you’ll read in Clean Meat, the reviews so far are quite good. Shapiro was invited to try several foods in process, from “steak chips” to cultured foie gras to clean duck. A vegan for more than two decades, he writes, “I had little ethical concern about eating the [cultured] meat, but it still felt bizarre to be on the precipice of ingesting animal flesh.” He reports that the taste of the products he sampled was authentic; the duck “was exactly how I remembered duck tasting from my youth.”

Clean Meat should be read by anyone who cares about the planet, but most of all by those who currently eat and wear animals the way these products are made today. This book provides a detailed, well-rounded examination of a new industry that highlights the challenges — and the incredible possibilities — of feeding and clothing us all in an increasingly populated and demanding world.

“I’m convinced that when we look back in thirty years on today, how we raise and slaughter billions of animals to make our hamburgers and handbags, we’ll see this as being wasteful, inhumane, and indeed crazy,” Andras Forgacs of Modern Meadow tells Shapiro. “We need to move past just killing animals as a resource to something more civilized and evolved. Perhaps we’re ready for something literally and figuratively more cultured.”