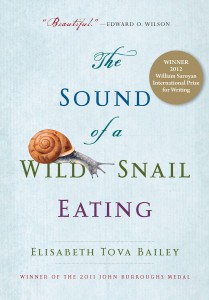 The Sound of a Wild Snail Eating by Elisabeth Tova Bailey is a meditative, thought-provoking book about one of our most underestimated and underappreciated animals—the wild snail—and the ways in which the natural world can illuminate our own.

When Elisabeth Bailey, normally an active person, is bedridden with a debilitating illness, she must cope not only with the illness but with the loss of her former life. “When the body is rendered useless,” she writes, “the mind still runs like a bloodhound…” She now finds herself with nothing but time, yet unlike her busy friends, she has nothing to do with it. “Time unused and only endured still vanishes, as if time itself is starving, and each day is swallowed whole, leaving no crumbs, no memory, no trace at all.”

When a friend brings her a flowerpot containing a woodland snail, Bailey turns to her new roommate as it explores its new surroundings. Among the first things she notices is that she can hear it munching on the flower leaves she’d placed in its new home. Later, after reading more about snail care, Bailey’s caregiver brought it a mushroom: “The snail loved the mushroom. It was so happy to have a familiar food, after weeks of nothing but wilted flowers, that for several days it slept right next to the huge piece of portobello, waking throughout the day to reach up and nibble before sinking back into a well-fed slumber.”

In part because snails are hermaphrodites, and in part because she couldn’t find a name that she liked better than the word snail itself, Bailey chose to call her new companion “my snail.” The affection with which she writes about her snail—and the anguish she feels when she wakes one day and believes it may be lost—is one of the loveliest things about this book. Because her own life has slowed so much, she is able to observe nearly moment of her snail’s existence, and its world is far more interesting than one might imagine.

In addition to learning of the daily life of this curious and easygoing creature, we learn from Bailey’s extensive snail research that her snail has more than 2,500 teeth, which regenerate as needed; that snails get by with only three senses—smell, taste, and touch; and that “romantic encounters between a pair of snails can take up to seven hours from start to finish.”

Although this slender book takes place largely in one room—in fact, mostly within the snail’s bedside terrarium—the world Bailey and her snail share is anything but small. Their year together encompasses birth and healing, learning and adapting. We discover along with Bailey that there is much to learn about not only our tiniest creatures but about living in the moment—and about the role all creatures play in connection to the greater world. “Although the snail moved more slowly than a human through the physical world, it traveled more quickly than a human along its pathway as an evolving species.”

Through the close observation of one intriguing animal, The Sound of a Wild Snail Eating will encourage readers to pay closer attention to all of the world’s animals, large or small, and to appreciate the small moments that make up our larger lives.