Junk Raft: An Ocean Voyage and a Rising Tide of Activism to Fight Plastic Pollution tells the terrifying and important story of plastics in our oceans, framed by Marcus Eriksen’s journey aboard Junk, the all-plastic raft he and his sailing partner took from California to Hawaii to raise awareness of the plight of our seas. 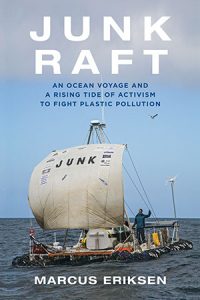 Eriksen, who would later go on to co-found the organization 5 Gyres Institute with his wife, Anna, writes about the 2,600-mile journey over eighty-eight days and its challenges—among them, structural problems with the raft and bracing storms—interspersing the narrative with facts that all consumers should know about plastic and its effects on the environment, especially the oceans. For example, even if we are among those who recycle, it’s not enough: up to 12 million tons of plastics end up in the ocean.

The statistics are staggering: Plastic production, which was zero during World War II, rose to 40 million tons by 1972, to 311 million tons in 2013, and is projected to reach 1 billion tons by 2050. Yet the recycling rate in the United States is only 9.2 percent (based on the latest study in 2013), and, even more alarming, non-recyclable plastics are exported to countries where environmental standards and workers’ health are unregulated. Of a visit to a processing site in India, Eriksen writes, “After ten minutes, my eyes were tingling and the back of my throat burned. The men [working] in this room absorb the largest dose of volatile plasticizers and pollutants, and according to a local NGO, they give up somewhere around twenty years of their lifespan for two dollars per day sorting our trash.”

India and China are among countries that send the plastic right back to the U.S. via new products created with the plastic sent to them. To tackle the problem at its inception, Eriksen advocates for an end the “throwaway culture” that leads to such waste in the first place. “I’ve witnessed a growing movement to end throwaway living…We need zero-waste and end-of-life design for everything we create; a world in which social and environmental justice becomes part of product and systems design.”

A veteran of the Persian Gulf War, Ericksen has a unique perspective on the politics of plastic: After the war, while rafting on the Mississippi, he “witnessed a never-ending trail of trash, which had its roots in the petroleum I had been sent to defend in Kuwait. Now I watched it drift to the ocean via America’s greatest watershed.” During some of the quieter moments during his journey onboard Junk, he reflects on the sense of betrayal he felt as a veteran: “I had given everything, a willingness to kill and be killed, for the sake of cheap oil and national interests.”

Junk Raft details the history and contemporary problem of plastics, including their production, the powerful lobbying that keeps such items as plastic bags in the marketplace, and the devastating effect plastic has on marine life. Countries like Germany and Chile are on the forefront of recycling that works—from reducing packaging to requiring producers to recover the waste from their own products—and by contrast, Eriksen writes, the U.S. is the only country of the thirty-five members of the Organisation for Economic Co-Operation and Development that does not have extended producer responsibility for packaging. Only ten U.S. states have bottle-recycling programs.

When it comes to plastics, marine animals are the biggest losers of all. Various studies have estimated that between 9 and 35 percent of fish have plastics in their stomachs—and this doesn’t even include sea lions and seabirds, and all those animals caught in discarded fishing gear. If today’s plastic waste goes unabated, up to 99 percent of seabirds will have ingested plastic by 2050. “Even in fish markets,” Eriksen writes, “clams and fish have been found with abundant micro- and nanoplastics in their guts, which we ingest if we eat them whole.” One recent study in the U.S. and Indonesia found that 25 percent of the fish in markets had plastics in their stomachs.

While the statistics are daunting, Eriksen writes with optimism—yet it is only through commitment to change our ways that life will improve for the oceans and its creatures. Eriksen writes, “I have tremendous hope. I am confident that we possess the collective intelligence and will to overcome the course that was set in the last century…Are we capable of replacing the globalization of stuff with the globalization of new ideas to transform our culture of consumption? To rebut Kurt Vonnegut’s epitaph for our species—‘Nice try’—I argue: ‘Not done.’”