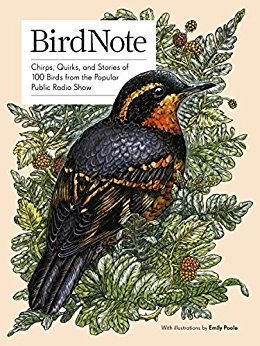 Here in Ashland, Oregon, I listen to our local radio station KSKQ. And for the past several years I’ve enjoyed the weekly, two-minute BirdNote programs.

So I was excited to find that there is now a BirdNote book. What the book lacks in audio, it makes up for in very high print production values; it is beautifully designed, with full-color illustrations and a handy bookmark tassel.

This will make an excellent gift for the would-be birder in your family. And even veteran birders will enjoy it. While I’d like to think I’ve learned a fair amount about birds over the years spent gazing upwards, I still learned plenty, such as:

My only complaint is that it would have been nice to see longer, more informative notes. A number of notes come in at just a few paragraphs.

Also, while some chapters do explain why certain species are threatened, such as the California Condor, I would have liked to see more of this, such as regarding the many species of albatross now under threat.

Quibbles aside, I recommend this book to anyone who loves birds (or anyone you think should love birds).

PS: All BirdNotes can be listened to online here

BirdNote: Chirps, Quirks, and Stories of 100 Birds from the Popular Public Radio Show