Florence Williams is a journalist and Fellow at the Center for Humans and Nature who often writes about the connections between people, health, and nature. She is a contributing editor at Outside magazine, and she also writes for  the New York Times, National Geographic, Slate, Mother Jones, High Country News, and other publications.

In her latest book The Nature Fix: Why Nature Makes Us Happier, Healthier, and More Creative (W.W. Norton 2017), Williams sets out to uncover the science behind nature’s positive effects on the brain. From forest trails in Korea, to islands in Finland, to groves of eucalyptus in California, she investigates the science at the confluence of environment, mood, health, and creativity. Delving into completely new research, she reveals the powers of the natural world to improve health, promote reflection and innovation, and ultimately strengthen our relationships. 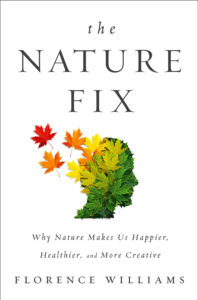 Where and when did you develop your love for the outdoors?

I grew up in New York City. My parents were divorced, and every summer my father took me on long wilderness vacations to Canada or out West. From an early age, I learned that forests and rivers and big landscapes provided fun and excitement, as well as peace and reflection. As a teenager, I sought out pockets of green in the city. I spent tons of time in city parks, biking, running, and hanging out with friends. We felt like we owned the parks, which is how city parks should make us feel.

Your book examines natural environments all over the world, but you’re American. How does the way people in other countries engage with nature compare to people in the United States?

I think some other countries are way ahead of us in terms of understanding how valuable nature can be for mental health. I think we have a lot to learn from how Asian and Northern European countries incorporate nature engagement into everyday life, from house plants to recreation to preschools to medical treatment. Our healthcare establishment is largely driven by drugs and profits, whereas a lot of other countries take preventive health more seriously, but I think there is growing awareness of that here.

America has had a long literary relationship with the outdoors, from Thoreau to Bill Bryson. Where do you see yourself within this long tradition of American nature writing?

I don’t really consider my work nature writing, which can lean a bit too romantic for my taste. I have a journalist’s eye, and I like finding connections that are sometimes obscure. I’ve always been interested in the intersection of humans and the environment. I like putting people into the equation, and I like to think I bring a balance of humor and serious science and social questions about why we feel and think the way we do.

An extended excursion into nature is a privilege that many people living in cities don’t often have access to. How can civil and state governments adapt existing urban environments to enhance them and make them more nature friendly?

That’s a really important question as we become an ever-more-urban species. I was surprised to learn that most large cities in the U.S. have pretty decent park and natural resources. The problem is making them accessible to everyone and then reducing the hurdles to using them. These include cultural hurdles, perceptions of safety, and finding plain old time. I’d love to see schools and civic institutions promote programs that help urban populations feel more comfortable in nature from an early age. The more we use the parks, the safer they’ll feel, both physically and culturally.

Much of the environmentalist discourse of the twentieth century has been founded on scientific principles, but you cite Wordsworth in addition to scientific research. Why?

Actually, I would argue that not enough discourse is founded on science. I think we are still very much living out the Romantic legacy, which became the basis of the American environmental movement. This isn’t necessarily a bad thing. The Romantic poets taught us how to see beauty and even divinity in the world apart from the way organized religion did, and they understood that time in nature was critical to humanity. In a lot of ways the Romantics inspired and anticipated the neuroscience we see now. But not everyone can relate to the Romantic discourse, and often it didn’t make allowances for, say, native populations or the realities of conservation. Science can really help us there. For example, there is more biodiversity in cities than we think, and we should be putting resources into coexisting with nature where we live as well as protecting it “out there” in the backcountry.

You say that “a 15-minute walk in the woods causes measurable changes in physiology.” Have you found that different natural environments yield different physiological and psychological benefits?

Definitely. Humans are primed to love the natural world, but we still have to cultivate it, and cultivate it early. Because of how and where we do this, I think there’s a lot of variation in what people respond to emotionally. For some, it’s the ocean. For others, the ocean freaks them out and it’s a sunset over a city skyline. Because of where I grew up, my heart starts to sing when I enter Central Park. I also love the desert and a big river rolling through it. Think about where you were happiest outside as a child, and chances are you will feel joy in landscapes that are similar.

Did you find, while you were doing research and working on The Nature Fix that your engagement with the natural world had a direct effect on your writing?

I think the natural world inspires me to be a better person and to care about the communities I live in, and that in turn drives my journalism. On a more logistical level, writing a book is like running a marathon. Because I was aware of the nature-creativity-productivity axis, I did make an effort to go for regular walks in the woods and parks. I positioned my writing desk so that I could see the trees in my yard, and I was fortunate to spend some nice chunks of time in the wilderness. I’m convinced all of these things helped me stay sane under deadline as well as give my brain big and little rests to help me think. These are all things I will continue doing as long as I can, which I hope is a long, long time.

How can one balance a modern, digital life with a life that’s also connected to the natural world?

With increasing difficulty! We are all distracted and time crunched. We work longer hours and spend dramatically more time inside. I think the first step is to just notice this, and then it may begin to naturally self-correct. Beyond that, parents need to foster the connection to nature in their children’s lives so that it will always be there on some level. In the same way as we are coming to value exercise as part of a healthy daily routine, I think we will also come to appreciate time in nature as a critical part of the mix that keeps us going. It’s not a luxury; it’s essential to who we are and who we want to be. Because it’s joyful, spending time outside, in whatever way you love, doesn’t feel like a chore.

Is there an activity that you do that makes you feel particularly connected to nature?

My own weird eccentric habit is that I crumble leaves in my hand as I walk, even in the city, and take in the scents. I’ve always done it, but after writing this book I understand better the power of these substances in the trees and shrubs, and sometimes I can imagine them boosting my immune system and lightening my mood. I feel like I’ve discovered that trees have a secret superpower.