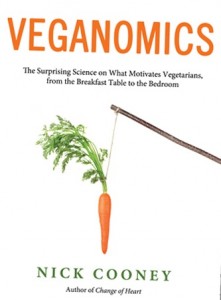 If you are looking for a ray of hope, it can be found in the effective altruism movement. Effective altruists are people who are thinking about not just doing good, but doing the most good they can do — and acting on it.

For those interested in animal welfare, a great introduction to this can be found in Nick Cooney‘s Veganomics: The Surprising Science on What Motivates Vegetarians from the Breakfast Table to the Bedroom. Frustrated that more people aren’t vegan? Sad friends and family don’t get it? Here’s your book.

Veganomics delves into scientific studies and crunches the numbers: Who are vegetarians? Why do they do it? Who is more likely to go meat-free? What motivates them to try and stick with it? It’s a data-driven approach to advocacy.

The book takes a utilitarian approach to ethics and advocacy. It’s aimed at how to do “the greatest good for the greatest number”: save the largest number of animals and get more people on board. This way of assessing vegetarian eating and saving animals can be a little off-putting at first — a Spock-like approach to a passionate issue.

However, the numbers can also be inspiring and motivating. Consider: The average woman is responsible for the suffering and death of 29 animals per year versus 37 animal deaths for men. Go meat-free and that’s lives saved.

Advocate for animals and you can triple, quadruple the number of lives saved. For vegetarians who aren’t engaged in activism, it’s still useful information. The way you respond to questions about what you eat can make a difference in furthering meat-free eating as a positive, viable choice.

“It’s a matter of getting the values people attach to vegetarian meats to be the values embraced by most Americans. Eating vegetarian chicken strips needs to become as American as eating apple pie.”

The book’s vegan advocacy checklist is available as a free download. A few key points:

It’s clear from the book that more data and research would be helpful. Overall, it’s about results-oriented compassion and effective animal advocacy.

“Compassionate people like you are the only hope animals have of escaping existential misery. That is not a theory or poetic rhetoric. It’s a cold, hard fact.”

What to read next: How to be Great at Doing Good (2015), Nick Cooney; The Most Good You Can Do (2015), Peter Singer and, forthcoming in August, Doing Good Better, William MacAskill. See also, In Defense of Animals: The Second Wave (2005), essays edited by Peter Singer, especially part III “Activists and Their Strategies.”

Inspired by this book: Check out Animal Charity Evaluators and the Center for Effective Altruism as well as the Humane League Labs, for more research on vegan advocacy.