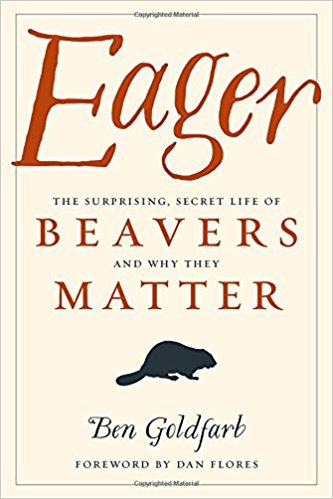 Those animals upon which the health of so many ecosystems depend — wolves and jaguars, sharks and sea otters, to name just a few.

Due in large part to their outsized impact on our planet, they are often blamed for getting in our way. Wolves take our cows and sheep. Sea otters take our seafood. And jaguars and sharks take away our sense of comfort on land and in water.

Beavers are also a keystone species and, not surprisingly, no friend to many city managers or land owners. They create chaos with our human-built rivers and drains. And, because they are the member of a family with few human friends — the rodent family — we tend to view them as just another invasive species.

But what if beavers are not the sharp-toothed Beelzebubs we make them out to be?

What if beavers are actually a solution to many of the environmental crises we face today (crises brought about in part because we have done such a good job of getting rid of beavers in the first place)?

As author Ben Goldfarb makes engagingly clear in the timely book Eager: The Surprising, Secret Life of Beavers and Why They Matter

the eradication of the beaver across the United States over the past several centuries has had a significant and negative impact on water quality and supply, fish populations, riparian vegetation and the countless creatures that depend on those millions of ponds that once dotted continental North America.

And why did we lose the beavers?

Blame it on a hat, the beaver hat. This European fashion craze brought about their near extermination. Eager takes us back to the 1500s when Europeans began trading pelts with the natives until the fur gold rush attracted fortune hunters from far and wide. The killing was so complete that it was widely assumed by those who settled in California in the 1800s that beavers had never lived in much of the state (when in fact they once blanketed the state). But researchers and historians are finally and gratefully setting the record straight. And they are making clear that beavers played a critical role in building not just dams but in conserving water for dry summer months, providing nesting places for other animals, and breeding waters for fish.

Fortunately, we’re starting to relearn what was forgotten so long ago — that beavers are essential to healthy ecosystems. And there is a growing chorus of “beaver believers” who are spreading the word about their many benefits of these animals. These believers stand up in city hall meetings and write letters and letter our cities know that there are people who do not want to see beavers killed. Besides, one does not easily eradicate beavers. City leaders are learning that it’s far wiser to learn to coexist with beavers than try to kill them, because when you create a vacuum you only encourage new residents to set up shop. And there are businesses now that will help you build flow-through tunnels that allow beavers to have their dams while also maintaining human-built infrastructure.

It’s not often I feel inspired after reading books about animals these days. Everywhere I turn I find another species in rapid decline (and it’s partly my fault because I’m drawn to endangered species).

And yet we have the beaver, a species that despite our best efforts continues to survive and, in many parts of the world, thrive.

Thankfully, a growing number of scientists, citizens and ranchers now see that beavers not only have much to offer this land, but may in fact play a essential role in saving it.

Out here in the west, water can never be taken for granted. Once the snow melt goes dry so too do the valleys, unless we dam enough of the snow melt along the way, which we’ve done. But beavers do it better, in staggered steps, in ways that not only collect water but recharge the water table, provide nesting sites for birds (sandhill cranes in particular), filter the water that passed through and over the dams, providing the perfect spawning ponds for salmon. We talk a lot in the Pacific Northwest about removing human-built dams to save the salmon, but we also need to talk about allowing beavers back to building some of their dams, which will also help salmon rebound.

It’s nice to read examples of old-school ranchers who would have once shot a beaver on site now working to protect them (a handful of ranchers had been doing this way back in the early 1900s). To protect beavers is to embrace a degree of chaos. But the fact is, the more we try to manage nature the less manageable it becomes.

Eager: The Surprising, Secret Life of Beavers and Why They Matter