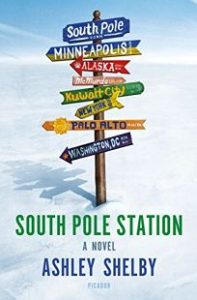 The novel’s central character is thirty-year-old Cooper Gosling, whose life has hit its nadir. Cooper’s art career is going nowhere, her relationship with her parents is strained, and her twin brother’s suicide has left her emotionally unmoored. Seeking something—there’s an ambiguousness to what that might be—Cooper applies to the National Science Foundation’s year-long Artist & Writer’s Program at Amundsen-Scott South Pole Station, “the most remote research station on the planet.” (Vetting includes 500 questions—a “pelvic exam of the mind,”—that includes such queries as “How many alcoholic drinks do you consume a week? A day?” and “Would you rather be a florist or a truck driver?”)

At the station, Cooper establishes an easy camaraderie with her fellow “Polies,” an eclectic group of scientists, support personnel, and artists whose defining characteristic is that they “don’t fit in anywhere else.” This commonality of sorts is what sustains the station’s fragile ecosystem. But cracks begin to emerge following the arrival of Frank Pavano, a scientist in the pocket of climate change-denying politicians and their allies in the fossil fuel industry.

Pavano’s presence at Amundsen-Scott—he’s out to prove global warming is a hoax—infuriates the station’s scientists and puzzles many of the non-science personnel, including Cooper, who befriends Pavano, and Pearl, a cook with Machiavellian ambition. When the scientists seek to undermine Pavano’s every activity, Cooper agrees to travel with him to the “ice-coring camp,” on the fringe of the polar outpost. It’s there that a freak accident will change Cooper forever, imperil the station, and ignite a global controversy.

This climate thread, one of many plot lines woven into South Pole Station, is what gives the novel its tension and an unexpected timeliness. (The book is due out in July.) In a recent article for Slate Shelby writes:

In 2010, I began work on a novel set in a time I was certain would be looked upon as one of the most embarrassing periods of the climate change “debate”: the George W. Bush era. The novel, set at South Pole Station and the West Antarctic Ice Sheet, … is, in part, a dark comedy, and it was a fun story to write—mostly because Obama was in office and the absurdities of politicians trying to legislate climate change out of existence had begun to fade away.

But as the opening scenes of the Trump era began to play out, these gremlins are springing back to life.

How much will Trump’s withdrawal of the U.S. from the Paris climate accord and his administration’s claw back of Obama-era environmental regulations energize “these gremlins”? How much might they slow, or even reverse, progress made over the last decade? My hope is very little. But “hope,” as Shelby sees it, is, ironically, what climate deniers often prey upon. Thus, this exchange between Cooper and two scientists—Sal and Sri—following a well-attended climate lecture by Pavano:

“No, she’s right,” Sal said, still looking at Cooper. “Pearl is the test case. She was buying last night. She was feeling guilty about participating in a consumer economy that is leading to the destruction of the earth. Remember what she said? ‘I don’t want the earth to be warming.’”

“But when Pavano told her it wasn’t, she said that made her feel better. She was relieved. Pavano gave her the out she was looking for.”

“Pearl is Everywoman,” Cooper said, through a mouthful of pancake.

Sri looked from Sal to Cooper and back again, his black unibrow furrowed. Suddenly, his eyes widened. “And it took Pavano two-thousandths of a second to plant doubt in Everywoman’s brain.” He stared at the wall. “Shit. People are dumb.”

Shelby likely didn’t intend for South Pole Station to be a call to action, but in the age of Trump it may become one. That would be a good thing. But I’d be remiss not to emphasize that South Pole Station is a solid read for any era. Shelby’s quick wit and journalistic eye for detail ground a story that will appeal to readers of environmental literature, polar enthusiasts, and anyone who loves a story with complex, quirky characters and a compelling plot.