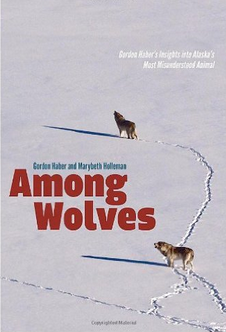 Among Wolves begins with tragic news of Gordon Haber’s death. Haber, the legendary biologist who spent over four decades in Alaska, died the way he lived, studying wolves in the wilderness of Denali National Park. It was October of 2009; Haber was in a research plane, as he often was, looking for wolves, when the plane crashed into a mountain along the East Fork River. The crash killed him and spared the pilot.

Alaskan Marybeth Holleman, a substantial writer on environmental issues, created a book that is a testament to Haber’s life. She compiled papers done by Haber himself, (he’d planned on writing his own book), brief essays by Haber’s pilots and other associates, journal and field notes made by the biologist, as well as his Tweets—one says “…yipping pups howled a great rollicking 4-min chorus for me from the pond area” (pg. 51). Holleman’s voice is a seamless addition found in the introduction, the epilogue, and at the start of each chapter, where she gives us background information that provides context on Haber’s work and the ever-fraught-with-controversy wolf situation.

Among Wolves is rich with photos, maps and diagrams. Most of the pictures were taken from the air, which may make one worry they are of lesser caliber than close up shots. However, the results are both intriguing and informing. Haber’s camera captured wide views of wolves in their family groups (his term, used instead of pack), showing them hunting, playing, crossing a river. These encompassing shots create a movie-like effect, without staging or interference by humans.

While Among Wolves teaches us about Haber’s life, including a glimpse of his boyhood summers at Lake Huron, Ontario, the deep relationships he developed with friends, his close encounters with brown bears, and his tireless commitment to educating the world about Canis lups, the book remains focused on wolves. I have a feeling Haber would have wanted it that way.

Haber’s work was funded by nonprofits, primarily Friends of Animals, allowing him the good fortune of not having to answer to a state or federal agency. This gave him a freedom that seemed to suit him well. Haber was able to work independently, and in doing so, he came up with his own well-informed theories about wolves. A section toward the end of the book called “Significant Findings of Gordon Haber’s Wolf Research,” summarizes the theories that are elaborated on in the text.

One especially fascinating finding discussed in the book is that several of the wolf dens in Denali have been used for thousands of years or longer, and not only by wolves. Three of these homesites contain archeological proof that they had once been used by humans. Among Wolves includes sketches by Haber of the Toklat group densite that details a multitude of deep and wide burrows as well as above ground areas used by wolves for resting, surveying their territory, and raising pups, a significant event in the life of the family oriented wolf.

Haber’s findings dwell on the social attributes of wolves, suggesting they are “perhaps the most social of all nonhuman vertebrates” (pg. 249). He shares examples of wolves watching out for each other, at times behaving altruistically. Yearlings and lower ranking wolves often watch over the pups, sometimes staying behind when the rest of the adults go hunting. By agreeing to babysit, the larger wolves give up their chance to have a good meal, which is not a minor sacrifice when you are a wild wolf. Yet they seem to enjoy their duty, and are more than tolerant of the persistent nipping and playing of the young pups.

One example of the social connection of wolves is wonderfully documented in a series of Haber’s photos. An alpha female had birthed nine pups and she and another female nursed them. It’s August, and time to move the pups, but there’s a river in the way and the pups are wary of crossing. Their mom isn’t too worried about them, perhaps because she knows the yearling female will take care of the situation. And she does, playfully urging the hesitant pups along, and at one point, using her mouth to lift one of them to safety. When it appears the strong current will carry a pup away, the yearling jumps in the water and blocks it from flowing downstream so the soaked pup is able to climb up the bank.

Of course, as is the woe of wolves, many tales do not have a happy ending. Haber repeatedly observed the reactions of wolves when they lost family members to humans after leaving the safety of the park. One male of the Savage River group stayed with his mate for two weeks while she suffered in a trap. After the trapper hauled her body out by snowmobile (also shown in photos), Haber listened as the male wolf howled for his loss. The mourning wolf returned to the trap site over and over again. A month later he was shot by a hunter outside another area of Denali.

Haber fought hard for a no trapping/no hunting buffer zone that would protect wolves when they left certain areas of the park. In 2000 the Alaskan Department of Fish and Game finally agreed to this, although the zone covered less territory than Haber had requested. In 2010, just four months after Haber’s death, the buffer zone was repealed completely and an eight year moratorium on all such proposals was enacted. With no protection at the edges of the park, as well as what Holleman calls, “the largest de facto predator control Alaska’s wolves have ever endured…” (pg. 255), the wolf population of Denali has nose-dived.

Among Wolves is a rich addition to Canis lupus literature. It includes a great deal of new and intimate information on wolves. At the same time, this very readable book brings transparency to the figure of Gordon Haber, revealing to us, mostly through his own words, the intelligence and compassion of this remarkable man. And through the efforts of Marybeth Holleman, Haber’s vast and unique contribution to the world of wolves will prevail.

Among Animals
University of Alaska Press