The Revenge of Gaia: Earth’s Climate Crisis & The Fate of Humanity by James Lovelock 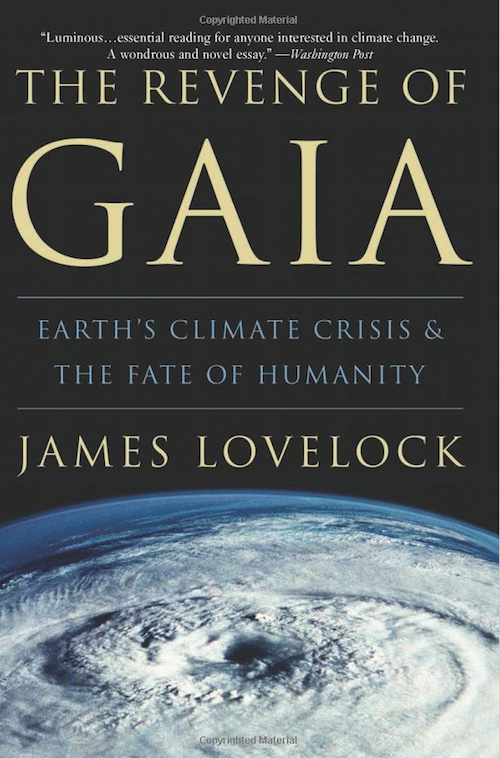 I began reading about Gaia after editing the second book in Blair Richmond’s Lithia Trilogy, The Ghost Runner, in which an environmental studies professor brings up the Gaia hypothesis in class. I was intrigued by the idea that the earth is a living, breathing entity that might defend itself against threats. Of course, this glimpse of Gaia was in a fictional context, and I wanted to learn more about the origins of Gaia. So I began reading the work of James Lovelock, the independent scientist who founded the Gaia hypothesis (now the Gaia theory), beginning with some of his earliest writings about Gaia in the 1970s and onward to The Revenge of Gaia, published in 2006. One thing that struck me was Lovelock’s optimism in his earlier works (“whatever we do to the system, we will be drawn into the Gaian process of regulation,” he wrote in Gaia: A New Look at Life on Earth in 1979), followed by his dire predictions later on (“before this century is over, billions of us will die and the few remaining breeding pairs of people that survive will be in the arctic regions where the climate remains tolerable,” he wrote in The Revenge of Gaia in 2006). If this sounds drastic, this is precisely the point—we humans should have started paying closer attention long ago to how our abuses of land, air, and water have affected the planet.

Now, Lovelock believes, we are past the point of no return. The idea of sustainable development, he tells us, is like a smoker quitting smoking in order to cure his cancer—it’s far too late for that, as the damage is already done. The planet is desperately ill, Lovelock writes, and will “soon pass into a morbid fever that may last as long as 100,000 years.” Can anything be done? Lovelock suggests turning to nuclear energy right away, and he also believes we need an international program to save the environment “whose scale dwarfs space and military programs in cost and size.” We must to act as if we are in immediate danger, he says, because we are. In an earlier book, Gaia: The Practical Science of Planetary Medicine, first published in 1991, Lovelock mentioned the three deadly Cs: cars, cattle, and chainsaws—and our efforts at sustainable regulation so far haven’t been enough, leading to the devastation of land and forest, the pollution of air and oceans, and a planet warming too rapidly now to be able to stop its progression. In The Revenge of Gaia, Lovelock offers little hope for the future: “There is a small chance the skeptics may be right, or we might be saved by an unexpected event like a series of volcanic eruptions severe enough to block out sunlight and so cool the Earth.” When the best we can hope for is catastrophic volcanic activity, this is pretty depressing—but my hope is that readers don’t dismiss these predictions but embrace them and find new hope in protecting the planet.

As devastating as this book is to read, I appreciate that Lovelock doesn’t mince words—soft-pedaling around the problem or denying it altogether isn’t going to save the planet or the animal and human populations that are and will be in danger. Lovelock emphasizes that the responsibility lies with us all—it’s not exactly a call to action but a reminder that we are all a part of the system and should remember that with all of our choices. “As we go about our daily lives we are almost all of us engaged in the demolition of Gaia,” he writes. “We do it every hour of every day, as we drive to work, shop or visit friends or as we fly to some distant holiday destination. We do it as we keep our homes and workplaces cool in summer and warm in winter…We will, by thinking selfishly only of the welfare of humans and ignoring Gaia, have caused our own near extinction.”