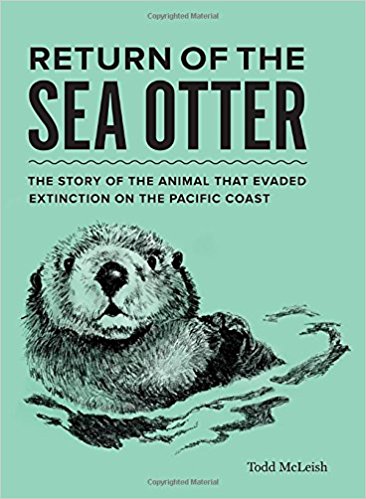 The sea otter should have been extinct by now.

We, as in human civilization, did our very best to eliminate the species — not because we saw it as a pest but because its pelts were among the most desirable. And so hundreds of thousands of these sea mammals were killed because they happened to posses the densest fur coats of any animal on this planet.

But the sea otter somehow managed to survive the slaughter. Handfuls of otters in Russia and the coasts of Alaska and California escaped, and, over time, their populations grew. Return of the Sea Otter: The Story of the Animal That Evaded Extinction on the Pacific Coast, by Todd McLeish, tells their comeback story — but with a caveat:  their comeback is not without its challenges.

Such as, sea otters are now considered pests. The fishing industry would like to see them eradicated or “managed” and this has led to much conflict and numerous accounts of sea otter attacks by boat and by gun. We simply do not know how many of these animals are killed by fisherman who deem them fair game, along with seals.

McLeish takes us with him as he visits researchers in Monterey, Alaska, British Columbia. We learn how sea otters are tracked and how the injured are nursed back to life. We watch them in the wild as they eat and play and use tools to pry open their shelled food — one of the few mammal to do so.

And we learn that their comeback story is geographically uneven. While they are doing better along the central California coast, there are vast areas along Alaska’s coast where they have declined. They are still missing from the coast of my home state of Oregon, where they were once numerous.

I always find it unfortunate when we must make the case for saving a species based on its value to us or the ecosystem. But the fact is, sea otters are considered keystone species of the coasts — and, as we are now learning, even estuaries. Sea otters love to exist among kelp and they feed on the creatures that would feed on kelp. By protecting the kelp they protect the countless other species that depend on kelp for their survival. Similarly, scientists have found that when sea otters live in estuaries, the grasses do far better, which in turn makes for healthier environments.

Of course, by eating sea urchins, fisherman have lost a key part of their industry. So, naturally, they say that sea otters must go.

It’s a tired story, but one that will play again and again as our oceans become increasingly depleted by, who else, the fishing industry. And make no mistake. The fishing industry is not the victim here. It’s time we as a society realize that there is no such thing as sustainable fisheries. We may want to believe they are possible, but they’re not. And you don’t have to look far to see atrocities taking place under the guise of sustainable fishing.

I enjoyed this book. And not only am I inspired by the stubbornness of this species, I’m equally inspired by the many researchers and volunteers and citizen scientists who do their parts to defend it.

You’ll come away knowing so much more about this amazing animal and, like me, desperate to go to the coast in search of seeing one (or a raft of them) in the wild.

Return of the Sea Otter: The Story of the Animal That Evaded Extinction on the Pacific Coast