Alexis M. Smith’s lovely novel Marrow Island envisions environmental catastrophe on several levels, beginning with a devastating earthquake and the subsequent oil refinery accident whose effects, even though these events are backstory, linger on every page. 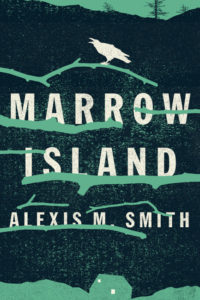 The novel begins with a mysterious opening chapter, in which Lucie Bowen, twenty years after the earthquake, is again fleeing the island of her youth, this time under very different circumstances. Unlike during the earthquake, which Lucie and her best friend, Katie, survived together, Katie now is a suspicious presence (“I’m not leaving you alone with her,” says Lucie’s boyfriend, Carey); by the end of this short chapter, Lucie says of the inhabitants of her former childhood home: “I forgive them for trying to kill me.”

When Lucie left Marrow Island, it was uninhabitable, or so she and everyone else believed. Yet when Katie writes decades later with stunning news — she has been living on the island with other “colonists” in a thriving community — Lucie’s affection for her friend and her journalistic curiosity bring her back.

On the island, Lucie witnesses an astonishing transformation, but she knows all cannot be what it appears. During her time on the island, through those from her long-lost friend to the colony’s leader, Sister J, Lucie begins to uncover what is really happening, and what she finds is both inspiring and devastating. While the story moves inexorably toward more devastation still, there remains a lot of hope, a belief that perhaps not all is lost after all; we see this in the colonists and attempts to recover the land, as well as in Lucie’s reconnecting with her past: “I felt Katie taking my hand. My body relaxed, a conditioned response that should have been lost years ago.”

Marrow Island is a book as much about a woman’s attempts to reconnect with her past as it is about the environment. With a narrative that alternates between Lucie’s visit to the island and her life in Oregon with Carey, Smith’s novel portrays the connections between eco-disasters natural and man-made, between relationships past and present, and how we recover — or do not — from landscapes forever changed.