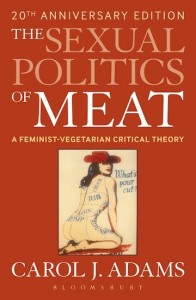 On a bookshelf or reading list, this classic of vegetarian thought belongs beside Peter Singer’s Animal Liberation. Originally published in 1990 and reprinted in a 20th Anniversary Edition The Sexual Politics of Meat: A Feminist-Vegetarian Critical Theory describes the intersection between feminism, pacifism and vegetarianism (conversely male dominance, war and meat-eating). It examines the use of language and narrative to shape society.

To marginalize a being, discount her interests, and use her for our own devices we take charge of her story. We control the language and discussion around her, cloaking her in layers and strategic silence. This systematically hidden being becomes “the absent referent.”

The average American eats 43 pigs, three lambs, 11 cows, four calves, 2,555 chickens and turkeys and 861 fishes in a lifetime. These beings, so the story goes, are naught more than tasty bacon and burgers. The individual animals with emotional lives and interest in living are subsumed by a system of consumption. The killing happens off stage. “Meat eating is a story applied to animals, it gives meaning to animals’ existence…Animals lives and bodies become material fit to receive human’s stories: the word becomes flesh.”

In The Sexual Politics of Meat, Carol J. Adams pours ink over these invisible beings and, disturbingly, we see ourselves. The same techniques and the same arguments used to discount the billions of animals consumed are used to discount women, the majority-minority, often simultaneously. So meat becomes a trope of women’s oppression.

It’s a painful read. Early chapters such as, “The Rape of Animals, the Butchering of Women,” link the consumption of animals and women. Adams draws attention to gut-churning abuses that one would be inclined to doubt or wish were overwrought except that they mirror modern news headlines. It’s reading about an atrocity during the atrocity. Without separation of history or fantasy, our daily dystopia is revealed as a horror.

As Adams continues, the book takes a stimulating and more palatable turn. Adams refers to a vast body of vegetarian thought and literature. Many thinkers have expressed urgency that animals be included “within the circle of moral consideration”. There’s a tradition that strongly acknowledges the entwined fates of women and animals, a unity of oppression. As women have sought to forward their interests in society they have seen this connection and responded by becoming vegetarian. Vegetarian feminists include: the Grimké sisters, Frances Willard, Clara Barton, Annie Besant, Matilda Joslyn Gagem, May Wright Sewall, and Mary Walker.

Instead of a hero’s journey, Adams describes a “vegetarian quest” of direct action against the dominant culture. The dietary choice of these agents of change tells a significant story that should not be ignored.

The last chapter, “Feminist-Vegetarian Critical Theory,” lists numerous works of fiction with feminist-vegetarian themes. It’s rich and thought-provoking material that encourages further exploration. You may find yourself wildly adding to your to-read list.

For all the dark material, the book ends on an uplifting note, “Feminist-vegetarian activity declares that an alternative worldview exists, one which celebrates life rather than consuming death; one which does not rely on resurrected animals but empowered people.” Adams includes a call to action and suggestions for change.

Be sure to read or re-read this book before the next round of political elections. Adams’ provides an enlightening, if sad, framework that explains the weird discourse that often surfaces when women run for office and women’s issues are discussed. It helps to have historical content for the link between women’s and animals’ rights and to see the reasons why. The Sexual Politics of Meat shows how closely the treatment of our lives and bodies are tied to those of animals in our cultural story. Language matters. Stories and narratives have power.

What next?
Read Upton Sinclair’s The Jungle, reviewed on EcoLit, a novel which also links human and animal oppression.

Inspired by this book?
Check out Farm Sanctuary’s Someone, Not Something project a concerted effort to counter the dominant story about animals as mere meat by exploring the behavior, emotion, and intelligence of farm animals.