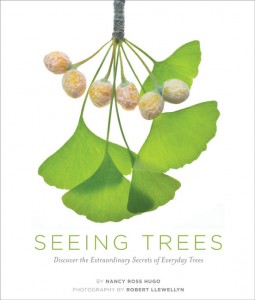 “The most effective way to save the threatened and decimated natural world is to cause people to fall in love with it again, with its beauty and reality.” Author Nancy Ross Hugo quotes British naturalist Peter Scott to explain why she does what she does, which is to delve deeply into the nature of individual trees. She wants the reader to come along with her on this journey, in the hope that to know trees is to love them. Seeing Trees is one beautiful book, big and splashy enough to sit on the coffee table, but you will not want it to languish there. Page through it in awe.

The good people at Timber Press have been providing the world with quality nature and gardening books for decades, and have given Hugo and photographer, Robert Llewellyn, the task of making us see trees with new eyes. Hugo’s loving attention to tree minutiae goes a long way towards this end, but much of the attraction of this book is due to the hyper-realistic photographs. Using software developed for microscopes, Llewellyn creates an image by taking many shots, each with a different point of focus, then merging them together. The leaves, seeds, and flowers are then displayed on a white backdrop like a vintage horticultural print. The photographs are pure nature porn, with the reproductive organs of the tree presented in such articulated clarity, it will be hard to look some trees in the eye again.

In what Hugo calls a process of discovery, she narrates an intimate backstory to the photos. It is like awakening to a new world. I am surrounded by shagbark hickories, and had never noticed the delicate pink bracts that unfurl beneath the glory of spring leaves. But Hugo had, and now I know where to look. Thanks to her, I finally know the difference between red oaks and white oaks (bristled leaf tips vs. smooth lobes), but she goes much further than mere identification. She points out that leaf size, shape, color, and arrangement on the twig are aspects to be noted not just between species, but are variations on a single tree in different seasons and stages. For example, leaves on the shady side of a tree are bigger than on the sunny side, because they need a greater surface area to collect the sun. Who knew?

Hugo is careful not to frighten us away with technical terms. When she must use nomenclature, she walks the reader through it. I was already familiar with words like catkin, angiosperm, lenticel, and drupe, but here’s a new one: Marcescent. This refers to the leaves on deciduous trees, such as beech, that hold onto their brown leaves until the spring leaves push them off the branch. The spot where the leaf had been attached to the twig is called a leaf scar, which would seem observant enough, but Hugo goes deeper still to bring attention to the bundle scars within, where the veins had been severed. Speaking of falling leaves, I cannot wait for next fall to try catching leaves in mid-air. I will do as she suggests and try for twelve, since the saying goes that every leaf you catch in the fall means a happy month the coming year.

Hugo is even smitten with tree litter, and considers the fallen leaves, twigs, and fruit as part of its personality, and as ornamental. It was news to me that some gardeners pair late-blooming perennials, such as golden mums, with the colored leaves that fall around them, such as red maple. I have admired such whimsical combinations in my own yard, without ever thinking one might consciously create the effect.

So grab your photographer’s loupe and get cozy by the tree in the backyard. It doesn’t even matter if you do not know its name. Stretch out and look up. Marvel. Rethink bark. Consider the tree as a community, complete with animal companions. Pick up a leaf and twirl it in your hand. As the poet Mary Oliver wrote, “If you notice anything, it leads you to notice more and more.” The first step in saving the natural world is to notice that it’s there. Then let yourself fall in love. 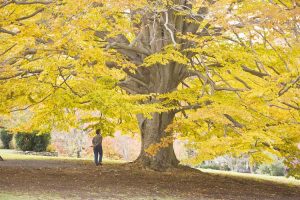