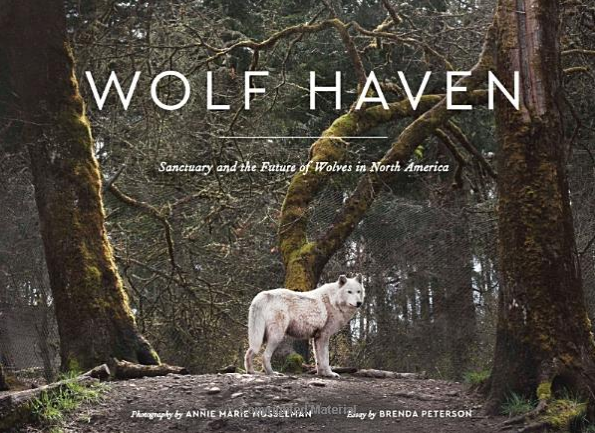 After finishing Wolf Haven I went straight to the Internet and looked up Wolf Haven International.

I had been aware of the California Wolf Center, located outside San Diego, but was not aware of Wolf Haven, located just south of Mt. Rainier. And now I can’t wait to visit.

But make no mistake; this is no petting zoo. In fact, the sanctuary goes to great lengths to keep many of the wolves far away from people so they stand a better chance of survival when they are introduced back into the wild. Just last month a number of Mexican gray wolves were reintroduced into northern Mexico after having spent time at Wolf Haven.

Approximately 200 of the Wolf Haven residents are forever residents; either captive bred or simply unable to survive on their own, Wolf Haven gives these animals some much-deserved peace. I wish I could say that the underlying message of this book will bring the reader peace, but the sad truth is that there is war on wolves, one that began a long time ago.

It’s estimated that when European settlers first made their way across North America that there were more than two million wolves here. But when settlers imported cows and sheep and steadily moved west, wolves soon focused their energies on these animals. Before long, the war on wolves had begun.

In about a hundred years wolves declined to as few as 1,500 animals. The eastern Red Wolf is still on the edge of regional extinction, along with the Mexican gray wolf in the United States.

Here in Oregon, few issues agitate animal lovers more than the plight of wolves. As Wolf Haven notes, our governor Kate Brown (despite the fact that she claims to care about the environment) allowed the wolf to be removed from the protected list. Apparently the government believes that a few dozen wolves constitutes “enough” wolves in this state. And now, tragically, their numbers will dwindle again as hunters and ranchers go after them.

With this in mind, the book Wolf Haven is a fitting tribute to a wolf sanctuary that is doing its part to protect these species.

If the measurement of a successful book is inciting someone to action, then Wolf Haven certainly qualifies. It has inspired me to give to this organization and one day make the trip up north to visit.

And to also remind our governor that wolves do matter to many residents of Oregon.

Wolf Haven: Sanctuary and the Future of Wolves in North America