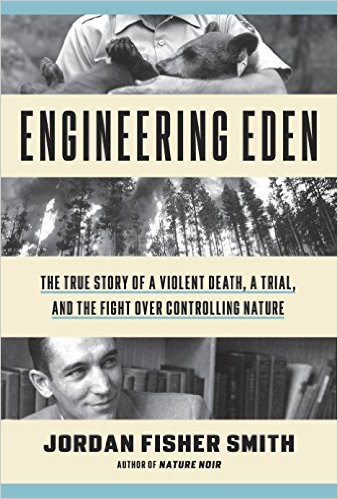 The National Park Service is celebrating its 100th anniversary this year. And while a century may seem like a long time, it’s safe to say, after reading Engineering Eden, that we’re only just beginning to understand how to best manage our lands.

Fundamental to management is the question of how “wild” do we want our parks to be? Author Jordan Fisher Smith writes:

There are two ways in which most people don’t wish to die: by being torn apart by a wild animal and by being roasted in flames. These two abject fears from deep in the ape-psyche, became, in the American West, bloated government programs, the two-headed dragon that Starker Leopold fought all his life.

In the early days of the park systems, we waged a war on predators that effectively eradicated them from most of the United States. In 1915, Congress authorized the killing of 11,000 coyotes in California, Oregon, Nevada, Idaho, and Utah. Wolves, bobcats, mountain lions were also killed in massive numbers, primarily to rid the government lands of predators that might attack livestock.

Interestingly, bears were largely given a pass in our national parks because they were a major tourist attraction. Shows were conducted in Yellowstone in which people would sit in bleachers to watch bears congregate at food dumps that the park service maintained. When these food dumps were closed in 1970 in an effort to create a more “balanced” ecosystem, a concept championed by naturalists such as Starker Leopold, chaos ensued. Hungry bears scoured campgrounds for food and came into conflict with humans.

The main narrative of the book centers around the story of one man mauled to death by a grizzly in Yellowstone Park in 1972 and the legal case that followed.

Smith covers a lot of material in this book, from elk hunting in Yosemite to controlled burning in Sequoia National Park, which at times may feel a bit overwhelming. But I appreciated the wealth of detail. And I empathized with the struggles that the park managers faced in trying to create environments that were both wild and safe. This isn’t Disneyland after all.

I also was not aware just how far back in history people were feeding bears from their cars — as in the 1920s! And bears were tearing their way into cars back then as well. Even then there were those who recommended that secure food storage was essential to living more harmoniously with these 400-pound neighbors. Sadly, it took too many decades until food storage became as well established as it is today.

Engineering Eden documents important and at times deeply tragic missteps in the evolution of our park system. Hopefully the next 100 years will be far more “balanced.”

Engineering Eden: The True Story of a Violent Death, a Trial, and the Fight over Controlling Nature