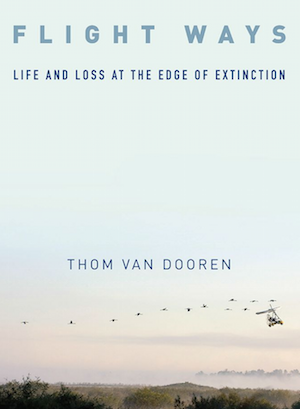 In Flight Ways: Life and Loss at the Edge of Extinction, environmental philosopher Thom van Dooren tells the stories of five species of bird:

Each species sheds light on a different “extinction story.” We begin with the albatross — birds that spend most of their lives gliding inches above the sea, ingesting plastics and other contaminants that they in turn feed to their offspring, resulting in increased numbers of dead offspring. Fishing lines have had an equally devastating effect on the adults. Most humans may never set eyes on an albatross, but by eating seafood or by simply participating in a global economy that relies on shipping plastic stuff, we have all had an impact on these majestic birds.

As van Dooren writes, “Our flight ways have crossed, and each of us has become implicated in the fate of the other.” He continues:

Standing among a colony of albatrosses along a windy cliff top on the island of Kaua’i, I was reminded of the shifting and consequential nature of this entanglement. … I reflected that perhaps what is most tragic about the current situation is not the “failure” of albatrosses to adjust or adapt to new threats and an altered environment … Rather, what is most tragic is another failure to adapt. Our own failure … Perhaps it is we who have not yet “evolved” into the kinds of beings worthy of our own inheritances.

We move on to the little penguin, which has for many years nested along the outer shores of Sydney, Australia — shores that are now lined with homes and sea walls, presenting obstacles and predators that have driven this species to the edge. This story is one of place — how animals not only lose real estate to humans but also their future. And humans, the late arrivals, too often view these penguins, simply searching for their old homes, as pests.

The Indian Vulture presents a tragic irony — a bird long associated with death now facing the death of its species, due largely to chemicals fed to cattle that may lengthen the life of cattle only to poison the birds. Vultures have long lived symbiotically with humans, playing the role of garbage collector — and, for the ethnic group known as the Parsee, vultures dispose of the human dead as well. But as the vultures pass away from sight, dogs and rats take up their role and, in turn, bring diseases back to the human communities. Extinction doesn’t just impact the species itself — its impact can be felt far and wide.

The story of the whooping crane is one that I thought I understood until reading this book. You might have seen videos of this human-assisted migration — an ultralight plane being used to teach young birds how to migrate south. But there is a darker, sadder story underneath the “feel-good” story — one of significant bird suffering. The birds selected for breeding never get to leave captivity. And other birds have been sacrificed over the years (sandhill cranes, chickens) to incubate the eggs, with limited success. Finally, the result of human intervention has been largely unsuccessful; that is, the captive-raised birds have not been particularly good at rearing their young, which raises doubt about the long-term viability of this conservation model. Van Dooren doesn’t suggest that we should stop trying to save this species, but he does urge a greater awareness for the costs that birds must pay to support this effort.

Finally, there is the Hawaiian Crow — a bird that does not exist outside of captivity. There are roughly 100 birds left alive — and humans are doing their very best to reintroduce the species into the wild. It is a story of hope.

Van Dooren writes about the “dull edge of extinction,” a phrase that captures the slow-motion disaster that is extinction. What we see here are examples of birds living on this edge, some perhaps destined to cross over, some perhaps not. And humans are playing violent and benevolent roles along the way. Van Doren highlights the inherent tensions between animal conservation and animal welfare. At what point is the cure worse than the disease?

This is an academic book, heavily footnoted, but the annotations do not get in the way of the stories, which are enlightening, albeit sad. Van Dooren does an excellent job of going beyond the science to the emotional experience of observing and spending time among the birds. The author is keenly aware of the role that stories play in raising awareness and, more important, empathy. This book is another example of the growing importance of environmental humanities in pushing society forward.

Flight Ways: Life and Loss at the Edge of Extinction
Columbia University Press