Wayne Pacelle’s The Bond is much more than its gentle title suggests. Rather than present a quaint book about the human-animal bond, Pacelle (president and CEO of the Humane Society of the United States) takes readers through a complex history of the relationships among human and non-human animals, from farming to hunting to pets to wildlife. 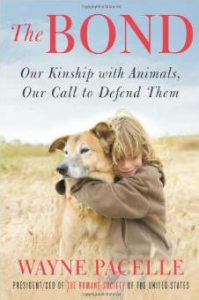 While much of the book highlights the work Pacelle and his colleagues at the HSUS have done on behalf of animals, The Bond is not merely a list of accomplishments; much of its significance lies in the why—the necessity of these battles the HSUS wages on behalf of animals, from improving conditions for farm animals to disaster-response legislation for pets.

From a California slaughterhouse to post-Katrina New Orleans, Pacelle takes readers on a journey through a country whose citizens claim to love animals yet allow them to be treated in ways that reveal the opposite (particularly interesting are Pacelle’s conversations with Michael Vick, in which Vick proclaims to love animals even as he sits in prison for dogfighting). Despite the horrific cruelty that Pacelle and his colleagues must witness in order to do the work they do, the book, while often disturbing in its imagery and realities, ultimately turns toward the positive. Of post-Katrina rescue efforts, Pacelle writes, “[A]n interesting thing happened—something I always hope for, but that you can never quite anticipate: the world saw that helping animals is a task that also helps people. The separate stories of the human rescue and the animal rescue melded together…”

Despite the ways in which we love our pets (170 million dogs and cats reside in American homes), “we slaughter upwards of fifty billion domesticated animals for food every year in the world, with an ever-growing share confined for their entire lives on factory farms.” To make the connection between pets and all other animals, Pacelle devotes early sections of the book to the intellectual and emotional lives of animals, showing their great capacity for love, joy, and grief. He also presents the cruelty of factory farming, putting it into human perspective when he quotes the University of Arkansas Division of Agriculture on chickens raised for meat, fattened up to a dangerous weight before being slaughtered at only seven weeks old: “‘If you grew as fast as a chicken you’d weigh 349 pounds at age 2.’”

Of course, animal factories are not just for farm animals; Pacelle writes about puppy mills and breeding, and he also writes about sport hunting, including devastating details from his trip to Yosemite in 1989, to witness and attempt to halt the public hunting of bison who strayed out of the park. “Montana wardens had been sent out as scouts to locate the bison and then radio their whereabouts to our driver. Once the vehicle was close enough to the bison, he stopped the truck, and the hunters hopped off…The bison didn’t have a chance, and one after another they fell in a heap…These animals were used to seeing people, and before that moment had never been hunted by them, much less slaughtered in a sneak attack.”

As the book’s subtitle promises, Pacelle addresses our need to defend all animals, not just those who live in our homes. He points out that among the biggest defenders of animal cruelty are organizations with benign-sounding names like Americans for Medical Progress and the Center for Consumer Freedom: “These groups have staffs, offices, stationary, websites, money, and everything else that a real public-interest organization has—except members,” Pacelle writes. “In most cases, they are entirely the creation of animal-use industries, and they exist mainly to present the illusion of mainstream opposition to animal protection.” Even the American Veterinary Medical Association aligns with agribusiness over animal welfare: “On most issues of animal welfare, the industry will not relent at all, and the AVMA won’t either.”

It’s hard not to believe that most of humanity cares about animals and their welfare, and that such abuse still exists in this world because people are simply not aware of it—and of course the industries of abuse rely on this denial. “For all of these industries, their trade groups, and their apologists, the suffering of animals is the most incidental of details,” Pacelle writes. “They prefer not to think about it, and they try very hard to make sure that you don’t either.”

Yet Pacelle’s The Bond ensures that sure we do think about it—and the book includes a list of fifty ways to help animals, exhorting readers to examine everything from what they eat to what they buy in order to avoid playing a role in cruelty to animals. It’s a list that’s comprehensive enough that anyone can make a difference, whether it’s eating plant-based foods or getting involved in rescue efforts or animal-protection campaigns. Pacelle reminds us that with every choice we make, we can perpetuate the abuse of animals, or take a stand against it.

1 thought on “Book Review – The Bond: Our Kinship with Animals, Our Call to Defend Them by Wayne Pacelle”