Barbara Kingsolver’s Flight Behavior does all that a great work of eco-fiction should, addressing the issues (climate change) without sacrificing the story (a woman whose small-town world is broken wide open by a mysterious act of nature). 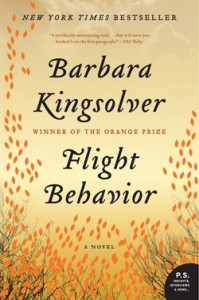 Dellarobia Turnbow, married at seventeen due to a pregnancy in which she lost the baby, is a decade later still married, tied to her two young children and husband’s family farm. She escapes emotionally through wild crushes on various men—and one day, planning to go through with an affair, she heads into the mountains for the rendezvous, only to find a “lake of fire” awaiting her. The sight of it, blurred because she’d left her glasses behind, brings her back to reality and she returns home, determined to accept her life as it is. Then, when she learns of her in-laws’ plans to log the forest from which she’s just returned, she tells her husband, “They can’t log that mountain.” When pressed for a reason, she can say only, “The world can surprise you…It could be something special up there.”

That “something special” turns out to be a vast population of monarch butterflies, whose arrival, to the locals, signifies a miracle of God; to the scientific community, it’s a sign of ecological disaster.

Soon Dellarobia’s Southern Appalachian town is filled with visitors—scientists and activists, the media and the curious. Dellarobia, who has been living restlessly in a home built by her in-laws while she raises her kids and her husband works the farm, becomes drawn into the wider world of the monarchs and the global implications for their sudden and unexplained arrival in her town.

While Dellarobia, smart and intellectually curious despite a limited education, is disturbed by the fate of the butterflies and what their detour means for the ecosystem, for most of the people in her town, “weather is the Lord’s business,” and denial reigns, as does the need for survival—like the promise of logging money “‘when there’s trees standing that could be trees laying down,’” as Dellarobia’s father-in-law says.

Dellarobia is the first among them to realize that what is happening is bigger than all of them. “Man against Nature. Of all the possible conflicts, that was the one that was hopeless. Even a slim education had taught her this much: Man loses.”

Yet paying attention to climate change is a luxury for the local population, as Dellarobia herself sees when an environmental activist reads from a pledge to lower one’s carbon footprint. Among the items on the list are bringing Tupperware to restaurants for leftovers (“I’ve not eaten in a restaurant in over two years,” Dellarobia says), carrying a bottle of tap water instead of buying bottled water (“Our well water is good. We wouldn’t pay for store-bought.”), eating less red meat (Dellarobia’s family practically lives on mac and cheese), and shopping at secondhand stores (the only stories at which Dellarobia can afford to shop).

Dellabrobia feels keenly the differences between her own life and that of the researchers, students about her own age who have no children, who “had ridden airplanes, moved among foreigners, walked on the ground of other countries. Dellarobia had been nowhere…she couldn’t even muster the strength for jealousy, given the size it would have to take.” While she recognizes that their presence is environmentally tragic, she also knows that what’s happening is presenting her with an opportunity, not only for herself but for her bright young son and her baby daughter.

As winter looms and the study of butterflies on the mountain continues, Dellarobia becomes more involved in the research, harboring feelings for the lead scientist while seeing her own family and her own future through new eyes. Using both page-turning tension and great empathy, Kingsolver portrays not only the implications of a changing planet but the reverberations of personal change upon an entire family, creating an unforgettable story.