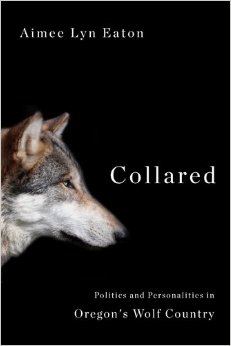 Wolves–will they ever cease to create controversy and incite emotion? After all, they are just another four-legged, fur-covered predator–powerful, but certainly not the “beast of waste and desolation,” that Teddy Roosevelt called them. Hopefully, the time will come when our biases become obsolete and people accept Canis lupus as the survivors they are. But we are still light years away from this understanding.

Which, in a sense is OK, because if wolves weren’t such a love ‘em or loath ‘em species, people would probably stop writing about them. And we wouldn’t have books like Aime Lyn Eaton’s Collared: Politics and Personalities in Oregon’s Wolf Country to enjoy.

Eaton does an admirable job of representing both sides in the proverbial wolf wars. She includes comments from wolf advocacy groups including Oregon Wild, Cascadia Wildlands, Big Wildlife, and Northeast Oregon Ecosystems. Their sentiments express the belief that the wolf is valuable to our ecosystem and should be protected.

And from the other side, Eaton offers a voice for Oregon ranchers, a group that tends to express regret that wolves ever returned to Oregon. Eaton spends time with livestock producers in the northeast corner of the state and we sense her sympathies for the added element of hardship wolves can add to a rancher’s already difficult life.

Collared also reveals the workings of the Oregon Department of Fish and Wildlife (ODFW), especially Russ Morgan, the state’s Wolf Coordinator. Caught in the middle, the ODFW must manage Canis lupus while surrounded by a culture fed on misinformation about the species. The pressure of Morgan’s position comes clear as Eaton sits beside him in his pickup truck, watching Morgan who “…seems to have a weariness that goes beyond not getting enough sleep.”

Eaton provides an in-depth review of the Oregon Wolf Plan (OWP), the people behind it, and the changes made to the plan. She takes us to the first gathering of the Wolf Advisory Committee held in 2003, and none of the tension of that meeting is lost in the retelling. The book includes an addendum that explains the July, 2013 revamping of the OWP, which directs in detail how livestock depredations are handled. This is an innovative document, one that sets Oregon apart from other states by allowing lethal removal of wolves only as a last resort. Under the new guidelines, livestock owners must demonstrate the use of non-lethal measures before the state will step in and kill predating wolves. And wolves now have four strikes, meaning they are allowed four qualifying incidents of livestock injury or death within a six month period before the ODFW will remove the offending animals.

Collared is a slim book, but then Oregon’s current wolf saga is also slim. The last of our original wolves was killed in 1947. Fifty-two years later, a wolf wandered to Oregon from Idaho. She was hastily caught and returned. But more followed and according to the ODFW, at the end of 2012 there were at least 46 wolves in six packs. All are in the northeast section of Oregon, except for Journey, the legendary wandering wolf who is now camped out in the southwestern part of the state.

Collared is a book for hard-core wolf enthusiasts, those who want all the details. Yet despite the scholarly bent of this book it is a captivating read. Eaton’s seamless writing takes us into all aspects of the wolf issue, from a hash brown scented diner where she meets with a rancher, to the Eagle Cap Wilderness where Eaton and Roblyn Brown, ODFW Assistant Wolf Coordinator, track a newly discovered pack of wolves. Her forays into the wilderness in search of wolves are some of the most memorable parts of the book.

It stands to reason that there should be a sequel to Collared (perhaps Uncollared?) as the Oregon wolf population increases and disperses into the Cascades and elsewhere. By the time this occurs, perhaps there will be less need to micro-manage the species. But the need will continue unless we change. As Eaton writes, “The wolves are just being wolves.” And Russ Morgan’s wise response to this comment is, “Yeah, it’s the people that are the challenge.”