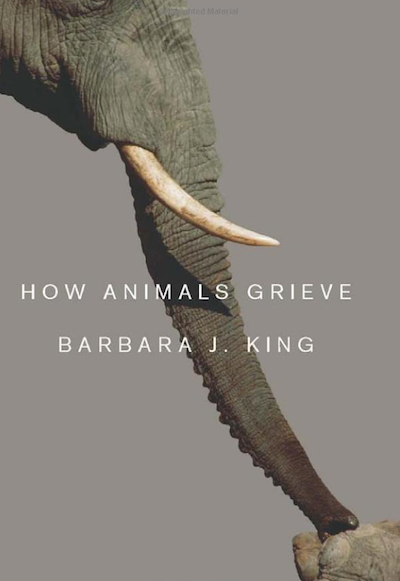 Let me begin by saying I recommend this book to anyone who doubts that animals grieve. The evidence presented is overwhelming.

Dolphins who try to keep their dead calves afloat. Elephants who seek out the remains of their dead years after their passing. A cat who wails inconsolably after losing a sibling. A turtle who comes ashore and stares for hours at the photo of its dead loved one.

Or the story of two ducks, Kohl and Harper, who had been rescued from horrible lives in a foie gras factory. Author Barbara King writes:

That Kohl and Harper lived for four years at the sanctuary was, given their traumatic past histories, a happy and unexpected outcome. When Kohl could not longer walk, or his pain be treated effectively, he was euthanized. From outside the barn where the procedure took place, Harper was watching, and after it was over, he could see his friend’s body, lying in straw on the barn floor. At first, Harper tried to communicate with Kohl in the usual ways. Getting no response, he bent down and prodded Kohl with his head. After more inspection and prodding, Harper lay down next to Kohl and put his head and neck over Kohl’s neck. He stayed in that position for some hours.

Harper got up eventually, and sanctuary caretakers removed Kohl’s body. For a while after that, Harper went every day to his favorite spot, once shared with Kohl, next to a small pond. There he would sit. Efforts to introduce him to another potential duck friend didn’t take, which was especially sad because Harper was now more nervous around people without Kohl. Everyone at the sanctuary recognized Harper’s depression. Two months later, Harper died as well.

Reading the many stories included in this book isn’t easy. Particularly because, as King notes, too many of the scientists who provide the source material resist seeing grief where grief clearly resides. And, in some horrible cases, scientists have inflicted grief onto animals only to prove that it does exist.

The author astutely makes the point that not all humans grieve publicly, so we can’t assume that the lack of display with animals is proof that they do not grieve. People are not all the same, and neither are animals of a given species.

The major lesson to be taken from this book for those in charge of animals is to allow the necessary time for grieving. Don’t just rush away the body. Let the animal companions spend time with the body and grieve in their own ways, if this takes a few minutes or hours or longer.

People need time to grieve. So do animals.

“Grief is but the price of love,” the author writes, quoting animal welfare activist Marc Bekoff.

Anthropomorphism is a four-letter word in scientific circles and the author did a good job of keeping her distance while laying out the facts for all to see — though at times I felt she worked a bit too hard to keep her distance (I’m not scientist so I have no problem anthropomorphizing). For instance, while there is ample evidence that elephants and dolphins and apes grieve, the author cites the limited evidence for monkeys to conclude they do not mourn the dead.

It’s time that more people felt grief over the way we treat animals. This book is an important step in that direction.

EcoLit Books received an advance review copy of this title from the publisher. Here is our review policy.