Readers of Curt Meine and Keefe Keeley’s anthology The Driftless Reader (University of Wisconsin Press, 2017) will find selections from eighty writers whom the editors describe as “eminent and obscure, bygone and contemporary, indigenous and outsider, poetic and scientific, and historic and hybrids .” Among some of the better-known writers are Henry David Thoreau, Robin Kimmerer, John Muir, Mark Twain, Frank Lloyd Wright, Laura Ingalls Wilder, Wallace Stegner, and Black Hawk. The selections are accompanied by fifty-five illustrations which help to tell the story of the Driftless region, its settlers, inhabitants, scientists, and those who journeyed through the unglaciated topography in southwestern Wisconsin and adjoining portions of Illinois, Iowa, and Minnesota. 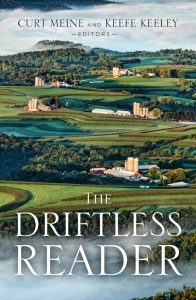 To help the reader understand the area and its effect upon those who have lived on it, studied it, or simply traveled through it, the editors have divided the essays into eight thematic sections: 1) Geologic Origins; 2} Ancient Peoples; 3) Historical Ecologies; 4) Native Voices; 5) Explorations; 6) Early Economies; 7) Settler Stories; 8) Farming Lives; 9) Waterways; 10) Conserving Lands; 11) Communities in Transition; and 12) Futures. This convenient organization should be a model for examining virtually any geographical area of the United States to which people have gravitated because they found a welcoming and, as with the native inhabitants, a satisfying spiritual environment awaiting them.

This book, as the editors make clear in the “Preface,” is intended to emphasize the relationship between both the character of the place and the people who have lived and live within it. They write, “More than just a location, a place is built on the meanings people find and create there.” The layers of the Driftless’ are rich and their meanings are brought to life through the observations of those who have studied and lived upon it:

Geology provides our foundation for understanding the extent of the place, but from there we step into other modes of understanding. The geological, hydrological, and ecological space becomes personal and cultural through the stories and meanings that it gathers—layered, shaped, grown over, and occasionally exposed, like the strata of Driftless bedrock. Individual experience colors these lenses and layers….

The editors’ “Preface” contains brief but enlightening personal accounts of their own encounters with the area. Keefe Keeley, a native of Kickapoo Valley within the Driftless region, is currently the executive director of the Savanna Institute, an organization that helps famers develop sustainable agro-ecosystems in the Upper Midwest. He writes of standing at a rock face of dolomite where he saw “sketches of wind and water, roots and fire, claws and paws, and, most recently, human etchings.” Then he adds, “Compared with writing on paper, or uploading words into the cloud, this little cliff seems an enduring place to have made a mark, but these rocks, too, are pages of history, turning into eroded stories, myth, and mystery.” It is where the story of stories of discovery has been inscribed. But, as he continues to observe, “Yet at its most innocent, discovery is personal. As the mural on a wall of my school in the Kickapoo Valley paraphrased Proust: ‘The real voyage of discovery consists not in seeking new landscapes, but in having new eyes.’”

Besides being known for his many books on conservation and as an Aldo Leopold scholar, Curt Meine is a Senior Fellow at both the Aldo Leopold Foundation and the Center for Humans and Nature, a Research Associate with the International Crane Foundation, and an adjunct professor in the Department of Forest and Wildlife Ecology at the University of Wisconsin. While he is not a native of the Driftless region in Wisconsin, he says that he has found himself “along the margins of long gone glaciers” for as long as he can remember. But now he lives “at the east portal of the Driftless, marginally more aware of its anomalous geology, its kaleidoscopic ecology, its deep and complex human history, its problems and its potential.” And as with Keefe’s remembrance of Proust’s words on the mural at his school, Meine also recalls Gary Snyder’s words written in the Sierra foothills: “’If the ground can be our common ground, we can begin to talk to each other (human and non-human) once again.’”

This book is not just a collection of commentaries on the Driftless region. It is orchestrated and presented by the editors in a manner that not only focuses attention on the Driftless region but also suggests a model that others might use to evoke the meanings underlying the natural surroundings that they call home. The editors’ insights and the voices they collect here become a poetic rendering of the meaning of place. In their final comment in the “Preface,” they write this: “We can dwell on that which divides us, but we all dwell within landscapes that connect us. By listening deeply to the voices of our diverse places, we may find many ways home and many ways forward.” This anthology helps the reader understand the diversity that can be found in multiple regions within this country, and it will encourage readers to look more deeply into the meaning of the regions in which they live.