In Stories from the Leopold Shack: Sand County Revisited, Estella Leopold takes her readers on an intimate journey into that now-fabled place to which her father introduced the world in A Sand County Almanac (Oxford University Press, 1949). The site in central Wisconsin close to Baraboo that Aldo and now his daughter Estella have chronicled is where Aldo, his wife Estella Bergere, and their five children spent their summers. They lived in a once-abandoned farm shack, where they worked together to restore the land upon which it sat—land they found to be despoiled by decades of agricultural malpractice. The site remains today a monument to what was Aldo Leopold’s idea of ecological restoration, and it is living testimony to what Leopold’s formulation of the “Land Ethic” can bring about. 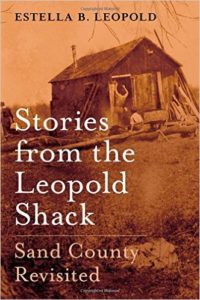 In her “Acknowledgments” Estella explains that the book began as a project in reminiscing. To occupy herself during long flights to Wisconsin from the West Coast where she lived and taught, Estella began to record stories she remembered from her childhood summers at the Shack. Of the Leopold’s five children, she was the youngest. And by the time her father was completing and revising A Sand County Almanac in the 1940s, her older siblings were in college. She often spent her adolescent summers at the Shack as the only companion of her parents.

Following the first chapter introducing the reconstruction of the Shack, Estella writes four chapters of stories taking place in the seasons of the year, following the general direction of her father’s book. These chapters offer memories of her time as a young girl when Estella came to know the treasures the land had to offer to her and her family. Like her father, she is a close observer of the minute. Here is an account of an early summer morning:

The family ritual started with Dad getting up very quietly, sometimes as early as 4:00 a.m., or even 3:00 a.m. when he was checking on bird songs and light. Dad would build a fire in the yard fireplace and make coffee out there, listening to the early birds with his light meter. He was measuring how much light there was as each species began to sing in the morning chorus….

As the Sun warmed the air, he went on his morning walk with Gus [his dog]. When the sun came up, Mother would rise, and then us children. It was always so pleasant to step out barefoot onto the dewy grass and walk to the Parthenon [privy], studying the pretty birdsfoot violets (Viola pedata) blooming along the path. In Dad’s prairie garden in front of the Shack, we would check out the gorgeous spiderwort (Tradescantia ohiensis), which could always count on producing one new fresh blue flower with three petals and a yellow center every single morning all summer.

In the final chapters, Estella recounts humorous and always respectful stories of her mother’s achievements in archery and bow hunting. She then moves on to stories that reflect the influence her childhood memories had upon her throughout her life, including learning the early restoration efforts on the land around the Shack, as well as learning the ongoing progress of restoration from the time of Estella’s father’s death to the present, largely carried on by the Leopold Foundation.

“The Shack Idea,” her concluding chapter, describes how Estella’s siblings and she continued to imprint her father’s legacy afar by settling into and protecting threatened places by constructing “shacks” of their own that anchored their intentions for restoration and sense of place. The five siblings established their own shacks in the midst of natural surroundings in California, Wyoming, Wisconsin (an “eco-friendly house” built by Nina—Estella’s older sister—and Charlie Bradley near the Leopold Shack in Wisconsin), Costa Rica, and, Estella’s own in Colorado. Each shack became a statement by the Leopold’s grown children that the land and the wildlife which inhabited it could thrive in concert with human presence. Estella writes this of her own adult experience:

The enrichment of the land community constituted what I call the “greening of Shack West” in Colorado: it was an area that under my protection was now freed of the terrible strychnine poison pellets that had wiped out the original coyotes, and doubtless many birds. My land was now free of grazing cows (except temporarily when the fence broke). I have been happy to know from the occasional tracks and exciting personal encounters that my land also includes a family of black bears and a family of mountain lions.

Estella Leopold’s reminiscences offer engaging and informative stories, intended primarily for the generations to come who tend to be raised in a culture that sees wilderness or despoiled landscapes as places to be circumvented. In a culture that is fearful of the outdoors and its nonhuman inhabitants, from insects to wolves to bears, this book shows why it is necessary to encounter and to preserve our natural surroundings by learning what it is to be part and parcel of these spaces and how much we depend upon them for our own existence. Parents should read this book for the lessons in living with the natural world and with one another that it provides. The Leopold children, when grown, followed these lessons they learned at the Leopold Shack. Three, including Estella, a paleobotanist, became members of the National Academy of Sciences. All have devoted their lives to investigating how much we and the environment depend upon one another for our existence. Estella Leopold’s book is an important introduction to how to achieve a complete life for generations to follow.

Read an interview with Estella Leopold in the Center for Humans and Nature’s September 2016 issue of Minding Nature.