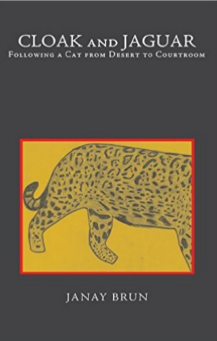 Living in Southern Oregon, we’ve followed the comings and goings of a gray wolf named OR-7. When it dipped into Northern California, it became the first documented wolf in that state in 100 years. But now that we have named this animal, we must live with the constant fear that it will be harmed by humans, such as ranchers or hunters.

With this in mind, I was eager to read Cloak and Jaguar by Janay Brun.

In 2011, Arizona saw its first documented jaguar in a decade. Jaguars once roamed widely through the Southwest US but have not been welcome in a very long time.

Brun meticulously documents her experiences with this cat, which came to be named Macho B. Brun works her way up from volunteer to paid member of a nonprofit with a goal of documenting the whereabouts of this cat with motion-activated cameras.

But here’s where things get complicated. At some point, a decision is made to collar Macho B, and Brun plays a role in doing just that. Only things go terribly wrong for this poor creature.

The rest of the book details the aftermath — the closing of ranks among the organizations charged with protecting the animal and Janay Brun’s journey as whistleblower and, ultimately, defendant.

The book includes such detail that I found myself confused at times as to the many players and agendas. And this chaotic mix of state and federal agencies (US Fish and Wildlife Service, Arizona Game and Fish Department) along with nonprofits no doubt played a role in the inevitable mismanagement of the capture.

You can compare Brun’s story with the AGFD’s story here. Personally, I trust Brun’s account far more than any organization that supports hunting. The irony here is that most of the agencies people believe are working on behalf of wild animals are also working on behalf of other agendas — such as those of hunters, ranchers, and those who would rather have these apex predators eradicated. But what was most troubling about this book was seeing how nonprofits also failed this animal.

I admire Brun for having the courage to not only to tell the truth after everything went wrong but to write this book knowing full well that she would be taking to task people and organizations that have still not been held accountable. I do hope that someday she can return to studying big cats because she is clearly on their side.

And I hope the painful lessons learned from Macho B’s death will give state and federal agencies reason to think twice before collaring another jaguar. There is another jaguar in Arizona: El Jefe. This book has an important role to play in ensuring that El Jefe and the jaguars who follow are better protected.