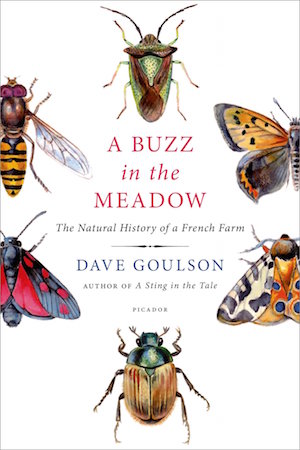 In A Buzz in the Meadow: The Natural History of a French Farm by Dave Goulson, insects are given the respect they are due.

For it is insects, in all their weird and wild ways, that keep this planet, and us, alive.

The book tells the story about the author’s adventures after having purchased a French farm in disrepair and his efforts to preserve much of this disrepair — as this is where the insects thrive. Chapter by chapter we discover through his eyes the many different species of butterfly, beetle, and fly that he shares his farm with.

You will learn much from this book and you won’t have to work for it. Goulson has a warm and witty style that ushers you through pastures and time periods, interspersed with interesting little nuggets of science and history, such as:

My only quibble with the book is a narrative device he uses of opening chapters with diary entries of his morning runs, something that I soon began skipping over.

The book heads towards a conclusion that, sadly, too many books about nature inevitably arrive — the loss of diversity of insects, the loss of numbers. Goulson invests a good deal of time on bees — and comes down forcefully against the use of neonics (neonicotinoids), the nasty chemicals used in insecticides — based not just on other research but his own. He notes that in parts of China farmers have since resorted to hand-pollinating pear and apple orchards because the bees are gone. We are quite literally poisoning bees — and countless other insects — to death. Every time I see someone spraying Roundup on a lawn I cringe.

And he concludes with a history lesson that questions whether humans ever lived “as one” with nature. He doesn’t think we ever did, and I agree.

But perhaps one day we can get there. This book will certainly help.

A Buzz in the Meadow: The Natural History of a French Farm