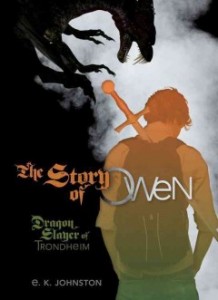 Imagine a world that is just like our own—same countries, same technologies, same history—but with one major difference: dragons. The dragons in The Story of Owen don’t limit themselves to feeding on damsels in distress. They’ll eat anybody. And livestock, too. But if there’s one thing these low-intelligence beasts truly can’t resist, it’s carbon emissions. Fossil fuels are like candy (and of similar nutritional value) to all species of dragons.

Dragons were a nuisance before the industrial revolution, but every small village had its dragon slayer. Now with increased carbon emissions, dragons are a major threat, and all dragon slayers get conscripted to protect the world’s oil reserves. After their years in the Oil Watch are over, dragon slayers usually stay in cities with high-paying corporate contracts. This leaves rural areas largely unprotected.

It is big news, then, when the Thorskards, a preeminent dragon-slaying family, announce they are going to move to a small town in Ontario. Lottie Thorskard has been forced to retire after a dragon injury she received while protecting automobiles in morning rush hour. She’ll focus now on training her nephew Owen.

Sixteen-year-old Siobhan McQuaid doesn’t think the arrival of the Thorskards in town will make much difference in her life. She’s focused on her music and avoiding her parents’ questions about what she’s going to do after high school. But she becomes friends with Owen, dragon-slayer-in-training, and his family asks her to become his bard. From there, Siobhan’s future is deeply intertwined with Owen’s, and with protecting her region from increased dragon attacks.

The Story of Owen brings alive an environmental dystopia, but it’s different from many in the genre. It’s not a futuristic scenario that tries to show what could happen if we don’t shape up. Instead, the narrative is rooted in a present-day parallel universe that seems to underscore the lengths to which we go to hold onto a fossil-fuel based life. This is a thought-provoking read—but also a very engaging story. (Recommended for grade 7 and up.)

Anna Monders is the booktalk specialist for Jackson County Library Services. She visits 200 elementary and middle schools classes a year, getting kids excited about reading.