I have to make a confession. In writing circles, there are certain types of books one is supposed to hold dearer than all others. Important books. Literary books. Books that bravely ponder the desperate squalor of the human condition.

I hate these books.

The truth is I’m a complete plot junkie. I want to read a book that will keep me up until three in the morning because I have to know what comes next. If the book happens to be Dostoyevsky—awesome; I’ll stay up all night pondering that desperate squalor, but Fyodor better keep the blood pumping. Enter We Are All Crew (2015, Akashic Books) by Bill Landauer. This eye-popping page turner hits on all levels and, I’m happy to say, will keep you up way past your bedtime. 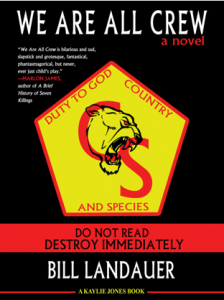 We Are All Crew is the story of two fourteen-year-old boys, Winthrop and Arthur, who escape from summer camp and attempt to hitchhike across the country in pursuit of that ultimate teenage dream—to see their favorite band play live in concert. Naturally this proves far more difficult than they could’ve ever imagined. They catch a ride on the Tamzene, a mysterious, strangely built boat powered entirely by hemp, and are immediately recruited in a battle between environmental crusaders and a deadly, government agency. Winthrop, the narrator, is a teenager you might recognize. He’s a fast talking, pop-culture soaked video game addict whose innocence and ignorance go hand in hand, as seen in lines like, “The air doesn’t smell like the city either; it smells like the river always has—like dead fish and chemicals.” One minute he’s cowering and wishing for his mother and the next he’s looking at a crew mate’s tattoos and informing us, “His tats are badass, people.” Winthrop’s irresistible, Caulfield-esque voice is addictive; I hated to leave him when the book ended. What sets Winthrop apart from most teenagers though, is that he’s the son of a prominent politician and the war he stumbles into will make him question everything he’s been brought to believe.

This is already a fresh, exhilarating story with a conscience, but Landauer takes the narrative to an entirely new level by introducing a third party to this environmental battle: the environment. This is the voice that greets you in the opening line of the book: “The trees tried to murder the boys.” That’s right. The trees are talking. The trees, the frogs, the birds, and don’t get me started on the terrifying squirrels. Nature itself is given a point of view in We Are All Crew, and that point of view is royally pissed off about what “the two-legged pigs” have done to the world. I found myself eavesdropping alongside a murder of crows and cheering for kamikaze beavers. As the Tamzene tries to make its way across the country, we are given amazing perspectives most readers have never imagined. Landauer channels Emerson loud and clear when he said, “The wonder is that we can see these trees and not wonder more.” By using this mesmerizing point of view, Landauer broadens the reader’s perspective. He makes you reevaluate your opinion on who or what can own a story and by the time the book is over, all other human-only stories—you know, those important books—will seem foolishly one-sided. The desperate squalor of the human condition, in other words, becomes eclipsed by the wretched mess we’ve made of our planet.

Talking trees? Government agencies that hunt down environmentalists? This all sounds a little surreal, you say. Landauer seems to anticipate a hesitation in our suspension of disbelief and scatters real life quotes throughout the book that are guaranteed to turn your stomach. “The radio cackles: ‘We’re out to kill the fuckers. We’re simply trying to eliminate them. Our goal is to destroy environmentalism once and for all.’” This little ray of sunshine comes from Ron Arnold, executive vice president of the Center for the Defense of Free Enterprise. The Tamzene’s radio brings other similar doses of reality, but it’s the fantastic elements of this book that hit home for me, where the spot-on hyperboles grow legs and are let loose to run. A covert operative from the NSA has a child whose vocal cords are strangled. An entire town is under the control of a giant television. And somehow through every crazy twist and turn of their adventure, as Winthrop and Arthur navigate a country of lost icons and disintegrating societies, they retain all their energy, humor, and that irresistible childhood faith that things have to turn out all right in the end.

I should say this book is for anyone who’s looking for a coming of age thriller with imagination, guts, and soul, but the truth is this book deserves to attract a much bigger audience. Important book people, I’m looking at you. Plot junkies? Jump on board. The Tamzene is ready to set sail.