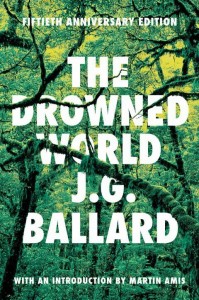 Read this in the heat of August — languorous, sweltering, submerged. It begins, “Soon it would be too hot.” J.G. Ballard’s The Drowned World is a classic in the growing genre of climate fiction — fiction that brings attention to climate change.

It’s not about the cause of a manmade global catastrophe (For this, Martin Amis, in the introduction to the 50th Anniversary edition, recommends Ballard’s The Drought 1964), but it does sink the reader quickly into the effect of a world grown prehistorically hot and inhospitable to human life.

The change is quickly summarized in dialogue, “Well, one could simply say that in response to the rises in temperature, humidity and radiation levels the flora and fauna of this planet are beginning to assume once again the forms they displayed the last time such conditions were present—roughly speaking, the Triassic period.”

Then the story lingers in the sweat — an intense setting.

“In the early morning light a strange mournful beauty hung over the lagoon; the somber green-black fronds of gymnosperms, intruders from a Triassic past, and the half-submerged white buildings of the 20th century still reflected together in the dark mirror of the water, the two interlocking worlds apparently suspended at some junction in time, the illusion momentarily broken when a giant water-spider cleft the oily surface a hundred yards away.”

The reader dives in with a small band of scientists lingering on the planet to study the effects of a solar flare, but quickly realizing they have reached their limits. They must leave. The Earth is growing too hot to sustain them (To where they will retreat? The story doesn’t care. A station in cold space?).

We remain on Earth where the story focuses primarily on protagonist Dr. Robert Kerans, one of a few people who refuse to leave Earth even though they will surely not survive its transformation. Kerans hides out at the remnants of the once luxurious Ritz hotel with a few ice chips and the last gasps of air conditioning. Among the scientists and explorers, there’s one lone woman, Beatrice Dahl, a central source of sultriness and objet d’art. It feels like Mad Men in the bayou.

The book’s most interesting idea is that as the world devolves it takes men’s minds with it. The characters grow slow and submerge in fever dreams and primitive fantasies. From a dream sequence:

“Reflecting these intermittent flares, the deep bowl of the water shone in a diffused opalescent blur, the discharged light of myriads of phosphorescing animalcula, congregating in dense shoals like a succession of submerged haloes. Between them the water was thick with thousands of entwined snakes and eels, writhing together in frantic tangles that tore the surface of the lagoon.”

Along with the characters, the reader becomes mired in a heavy, languid malaise of words that is both unendureable and irresistible. The arrival of a mad buckaneer, Strangman, with his pack of alligators and band of pirates, pushes the story to its end with melodramatic flair. Gowned and crowned Beatrice drips with jewels. It devolves into pulp fiction. A bizarre climax and denouement.

It’s a classic due to language. The Drowned World plunges the reader into a deep lagoon of words, language and imagery to fully experience the setting. The reader must slow down to pour over the lush, dense language. It creates the sensation of going under and swimming gator-like through vines. Readers may find themselves flowing blurrily over the sentences as though they were sipping a second Scotch on the rocks. It invites a second read.

This might be the perfect poolside book for summer, a slow go while the world grows warmer to incite fitful dreams and sweats on these long August nights. But, fair warning, you might be repulsed by The Drowned World’s primitive nature and long unheeded warning that this irrational world grows deadly hot — drowning, indeed.

Inspired by this novel?
Perhaps, you’d like to take a class in climate fiction? Maybe you already have? Or, read this discussion, “Will Fiction Influence How We React to Climate Change?” in The New York Times.

1 thought on “Book Review: The Drowned World by J.G. Ballard”