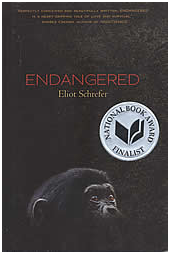 I stumbled on Elliot Schrefer’s young adult novel Endangered while searching my library’s catalog for fiction about endangered species. Other than two genre novels, this was the only hit and it felt, well, a little too obvious. I probably should have noticed this title when it was released in 2012, or at the very least when it earned recognition from the ALA, NPR, or became a National Book Award finalist, so it was with some chagrin that I checked it out and sat down to read. And read. And read. This book is a serious page turner.

A veteran of the genre, Schrefer flawlessly constructs all the pillars of YA. We are immediately introduced to Sophie Biyoya-Ciardulli, the sulking fifteen-year-old narrator on her way to spend the summer with her mother in the Democratic Republic of Congo, “where even the bullet holes have bullet holes.” She impulsively buys an abused juvenile Bonobo from a roadside hawker and brings him to her mother’s Bonobo sanctuary outside the capital city of Kinshasa, but just as she settles into sanctuary life a terrorist siege takes over the country. Schrefer sends Sophie on a pulse pounding journey to find her mother—who travelled to another refuge before the violence started—while becoming a mother in her own right to the orphan Bonobo she rescued. Terrorists try to kill her and starving citizens will poach Bonobos, so they flee to the jungle in their struggle to survive.

While Schrefer uses a fast-paced plot and increasing danger to make YA storytelling look deceptively easy, he moves beyond it at the same time to deliver a multilayered experience. Take, for example, the fact that Sophie is half Italian and half Congolese. At the beginning of the story she bemoans that she doesn’t fit into either cultural world. This identity issue later becomes symbolic of the crisis; she can’t be part of the cities or the jungle, she has neither human nor animal home. By also using a removed narrator—Sophie is an adult on the verge of marriage as she recalls the ordeal—Schrefer manages to deliver a vital, nuanced portrait of a girl who learns the dichotomy of being a compassionate human. Sophie finds incredible strength in becoming the Bonobo’s guardian, while realizing how vulnerable they both are to the forces of violence and destruction.

While reading, I only had one point of critique that unfortunately surfaced a number of times in the narrative. Sophie makes repeated reference to the fact that Bonobos are the most genetically similar animal to humans and her objection to eating them is that it would be almost like cannibalism. It read like the weakest possible argument for animal protection; a species’ right to live depends on its genetic proximity to humans? I understand the narrator is only fifteen and still developing her moral compass, but I would have liked hearing a more comprehensive conservationist point of view from at least one of the other characters. Sophie herself makes some explanation for this absent viewpoint, when she quotes the chants of the terrorists that have invaded the Bonobo sanctuary.

This translates to, “Animals, animals, give us meat, meat!” In Lingala, animal is just the plural form of meat.

The edition I read had a lot of great information in the appendix, including an author Q&A and a number of resources to learn more about Bonobos and get involved in their protection. I would recommend this book to every reader from middle school on up. Endangered is a gripping environmental and societal coming-of-age story, and if you enjoy this one, get ready for Threatened, Schrefer’s next title that moves north of the Congo river into the home of the chimpanzee. I know it will be on my must-read list.