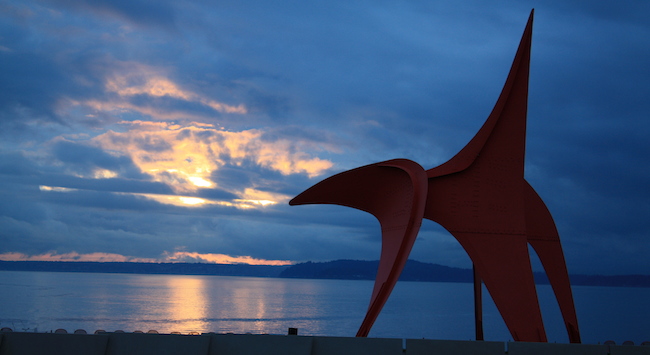 A week ago I traveled to Seattle to participate at the AWP Conference and Bookfair — the world’s largest gathering of writers and writing programs. Ashland Creek Press hosted a booth, and a number of our authors attended for panels and book signings. We also met editors at the environmental journals Newfound, Flyway, Catamaran, and Terrain.

With more than 12,000 writers at the conference, it was a crazy few days. Perhaps in part due to its Seattle location, a strong environmental theme ran throughout the conference, and I was pleased to see so many people at the “Greening of Literature” panel that I moderated with writers Ann Pancake, JoeAnn Hart, Mindy Mejia, and Gretchen Primack.

I only wish I could have recorded this session because each writer offered outstanding advice and inspiration for any writer pursuing eco-fiction or eco-poetry. I frantically took notes during the presentations. Below are a few nuggets that I was able to capture.

JoeAnn Hart is the author of Float and Addled. She posted her AWP talk on her blog and I highly recommend reading it in full. Here are a few passages that stuck with me:

As John Clancy said, the difference between reality and fiction, is that fiction has to make sense. So when I started Float, I began reading about marine plastics, which turned out to be not just unsightly, immortal, and deadly to sea animals, but toxic to humans as well. As the writing continued, my interest in the health of the oceans expanded. I read about dead zones, overfishing, bottom-trawling, acidification, and the opportunistic appetite of the jellyfish. I learned a lot about the sea, but much of it was pretty dry. Pages and pages of one damn fact after another. No racy scenes, no humor. No plot, no narrative, no characters. No Pauline tied to the train tracks. It was informative, but not particularly engaging. Intellectually, I was concerned; emotionally, I was on the outside looking in. Cerebral writing has a cerebral effect. Academic papers and straight journalism cannot convey human suffering; they can only calculate or report it.

But most readers don’t want to hear about populations; they want a specific person. Not the planet, but a particular place in a moment of time.

As writers, our most sustainable energy source is creativity, and we should use it freely. Literature teaches us to notice, to care, and to create meaning.

Gretchen Primack is a poet and author of Kind and Doris’ Red Spaces. Gretchen made clear that any writer aiming to write about the environment cannot overlook the animal industries. The pollution generated by these industries far outweigh the impact of cars — so we would make a much greater impact if we all simply stopped eating animal products.

Gretchen read Love This from Kind. Many of Gretchen’s poems take the perspective of the animals — and this is not pleasant place to be. It’s horrifying to see the world through a dairy cow’s eyes, to see your offspring yanked away from you immediately after giving birth, over and over again.

When asked how she could stay upbeat while writing such challenging poetry, Gretchen said that the writing process actually helped her, as she felt engaged and able to make a difference. And I think this is a key takeaway for any writer tackling difficult issues. It’s easy to get depressed when you see and learn horrible things, but by remembering that you’re putting your talents to work to help make a bad situation less bad, you can at least know you’re making an impact.

Gretchen also talked about a word that I find is too frequently used to distance us from animals — anthropomorphism. She asks: What if we, what the planet, erred on the side of having too much compassion for animals? Would that be a bad thing? And how much better would this planet be if we did just that?

Ann Pancake is the author of Strange as This Weather Has Been, a novel about mountaintop removal in Appalachia.

Ann  told us about her extensive research, which included newspapers (there were no books out yet on this issue), interviews with residents of the regions, time spent living in the region, and research at the state archives. She then let all this information “compost” for a period of time before she began writing. I love her compost metaphor because it drives home how important research is but also how this information often doesn’t make it into the writing directly, if it all. That is, Ann was clear in emphasizing how she often had to leave out information she wanted to mention when she realized that it would have come across as didactic — something writers of eco-fiction must strive to avoid.

She also provided tips about how to get a message in more subtle ways, such as relying on a child narrator. But she emphasized that you must prioritize your art above politics. That is, the story and the characters are most important — that the message will emerge through them, and not vice versa.

Mindy Mejia is the author of The Dragon Keeper. Mindy said that she didn’t set out to write an environmental work initially. She was simply writing a love story — a story about a zoologist and her relationship with a Komodo dragon — and that everyone loves a good love story. I couldn’t agree more!

Mindy talked about how she spoke to a classroom of students about her book and how they responded to fiction vs. nonfiction. What was interesting was how they had trusted her to get the science right — and this is a key lesson to any writer: The reader is placing faith in you, the writer, to not only tell a great story but to get the science right.

A bright future for eco-fiction and eco-poetry

I didn’t expect to leave Seattle feeling more energized than when I arrived, but that’s exactly how I felt — because I realized there are so many writers out there who are passionate about eco-literature. Based on the conversations, the readings, the number of people who dropped by our booth, I am optimistic about the future.

PS: I have to mention a nearby restaurant that I frequented while we were in Seattle: Veggie Grill. This place is all vegan, and I challenge any omnivore to eat here and not come away impressed. It’s one of many plant-based restaurants that prove that adopting a vegan diet is not about deprivation but about delicious, sustainable,  environmentally friendly food.