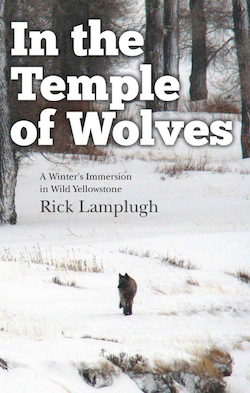 Imagine. Three months in Yellowstone’s Lamar Valley, the place known as America’s Serengeti, lush with bison, elk, bear, coyotes, wolves and other wild beasts. This is where writer Rick Lamplugh and his wife Mary Strickroth choose to spend their winters, serving as volunteers at the Lamar Buffalo Ranch, where seminars on the flora and fauna of Yellowstone draw visitors from across the globe.

They don’t have much time off from work (as Lamplugh writes, volunteers receive “a stipend of twelve dollars per day–even on our days off”), yet Lamplugh takes advantage of every moment, both on the job and off, to enmesh himself in our first National Park. Determined to know Yellowstone intimately, he spends one morning sitting in front of a cottonwood tree, exploring the intricacies of its trunk and the beauty of its branches. This observation expands into an absorbing natural history lesson about trees, sagebrush, and the theory of trophic cascades, which in a nutshell proposes that when natural predators (i.e., wolves) are removed from an ecosystem there is a significant, and often deleterious, effect on the plant and animal species left behind.

Lamplugh teaches his readers in a friendly, understated way. Most of what he shares is what he learns himself — from the land, the animals, as well as from the instructors he comes to know at Buffalo Camp. His curiosity is youth-like and contagious, drawing us into his stories as well as his moments of realization.

While viewing a dying bison calf through the lens of a spotting scope, Lamplugh feels conflicted. The animal will soon expire and he feels for it, yet he knows that its flesh will feed many. But is it voyeuristic to watch the tortuous process of the bison’s death, he wonders? Finally, Lamplugh comes to the conclusion that he will adopt a naturalist’s viewpoint and learn all he can from the grisly scenario. A hungry coyote appears, determines there is no threat, and grabs a mouth full of brown bison fur. The calf raises its head. The mother continues grazing. The coyote jumps on top of the calf and its efforts become more earnest. Lamplugh looks away. To our relief as well as the writer’s, the suffering finally ends and the carcass becomes a feast for coyotes, ravens, magpies, and an eagle.

The chapter entitled, “Vanity at Trout Lake” is one us middle-agers can relate to. Lamplugh embarks on a long hike, assisted by snowshoes. He’s stopped in his tracks by a huge bull bison, lying across the trail, staring “…with old brown eyes that deliver a clear message: I’m not moving.” Rather than take this as a sign that he should return to his cabin, Lamplugh takes a detour. Need I say more?  A detour in the frozen vastness of Yellowstone National Park? Alone?  Naturally, he gets lost, and a snowshoe goes missing as well. Struggling through the deep snow, clothes soaked, exhausted, Lamplugh admits that he went on this ambitious endeavor in an effort to emulate a much younger instructor, someone he “would love to be more like…” By the time Lamplugh finds his way back to Buffalo Ranch, he has earned our confidence and empathy with his honest and amusing appraisal of his very relatable shortcomings.

As the title suggests, this book talks a lot about wolves. We follow Lamplugh and other wolf fans as they search the Lamar Valley for a sight of Canis lupus. We meet Rick McIntyre, Yellowstone’s tireless wolf watcher, whose vast knowledge of wolves is generously shared in this book. And we meet ‘06, the courageous and much loved alpha female of the Lamar Canyon Pack. On December 6, 2012, ’06 was shot (legally, as wolves had recently been removed from the Endangered Species List) when she stepped out of the park. Her death was followed by that of several others, helping to reduce the number of wolves in Yellowstone from ninety-eight in 2011 to only seventy-one in 2013.

There’s a fresh quality to this book, a sincere sense of wonder at both the harshness and the beauty that Yellowstone has to offer. Lamplugh is passionate without being sentimental. And his writing is descriptive and clear, with a balanced blend of interesting facts and personal impressions.  Reading In the Temple of Wolves is like watching a well-done PBS special, only more intimate and a lot more amusing.

In the Temple of Wolves: A Winter’s Immersion in Wild Yellowstone