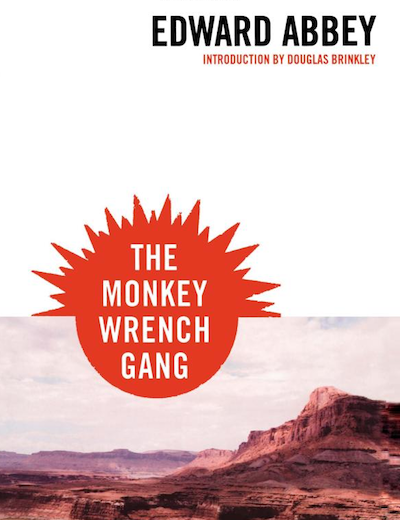 Whenever I speak to people about the eco-fiction, this book is the most commonly mentioned.

And it should be.

It’s the first book to put a name and face to the movement to protect the planet — or at least “throw a monkey wrench” in developments.

Published in 1975, many aspects of the book are remarkably timely, which is quite sad, of course. As the book is about four people who join forces to throw a monkey wrench into developments that are destroying local environments. This ranges from burning billboards to torching a clear cutting operation, destroying bridges, and, ultimately, trying to destroy the Glen Canyon Dam. The spirit of Ned Ludd looms large over this book.

The spirit of the book is infectious: four revolutionaries traveling across the Southwest desert destroying signs of commercialism and extraction along the way. It’s easy to see how this book has inspired a generation of activism. The firebrand of the group, Hayduke, sums it up nicely when he says:

“My job is to save the fucking wilderness. I don’t know anything else worth saving.”

What I like most about this book is how Abbey captures the “tilting at windmills” mentally of the characters. I empathize with their need to strike out, to say no in whatever fashion they can. But the more they destroy, the closer they get to being caught.

Near-misses multiply. People get sloppy. And the authorities get more persistent.

Abbey portrays a vivid, exciting world of living on the edge of society. And for these people, once they go to the edge and beyond, it’s clear they’re not coming back. Which is how I feel at times, though for different reasons.

There is a major flaw to this book, which is quite obvious to me. A number of characters are upset with developments that kill trees or damage native wildlife, and yet they all eat meat without any remorse. It’s a shame there is a disconnect among the characters regarding the detrimental effects of animal agriculture on the environment. But, then again, it’s the early 1970s. If this book were updated for today, that’s the only thing I would change. The rest of it, sadly, is as timely as it was when it was published.

One final point: I like how two of the characters are older — one is in his sixties. I look around today and sometimes wonder what happened to all that activism that sprouted in the 1970s only to go fallow in the ’80s and ’90s.