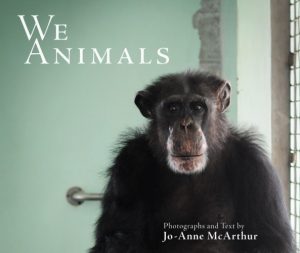 Contributors to the Indiegogo campaign received We Animals, photojournalist Jo-Anne McArthur’s beautifully designed coffee table book, just before the New Year. Published by Lantern Books, it features photos of individual animals used for entertainment, fashion, food, and research. It serves to highlight the barriers humans erect between themselves and other animals to assert dominance. The evident result — despair.

As with each photo, a great deal of thought went into the selection of the cover photo (at one point posited as an Indiegogo poll) and Ron the chimpanzee graces the final product. His gaze draws the reader into the book and its uncomfortable subject matter — stunted, constrained, abbreviated and tortured lives.

The animals in these more than 100 photographs, representing a wide variety of species and geographic diversity, are imprisoned — from the very first photo of a beetle at an Insectarium in Canada to the monkeys farmed in Laos for research labs. Their human counterparts share their fate as well confined behind wood fences, steel bars, and glass walls.

McArthur captures humanity’s natural inclination to connect in her photographs too. We see the girl reaching to touch the muzzled racing greyhound and an arm stretching towards bears at a zoo. Everyone in We Animals looks out at freedom, and separated from the ecosystem, suffers.

As McArthur says of a photo of walruses at an aquarium, “As I capture the image, I’m illustrating how we humans have distorted and inverted our vision of animals. We turn our backs on where animals should be, in their natural environment and where they are most themselves, to stare at two walruses circling their enclosure.”

She questions whether these interactions serve any purpose.

McArthur makes sure to highlight animals who might be overlooked. She offers the perspective of even her smallest subjects and makes us see the world from their view — for example, the lone, still minnow in its tiny, empty tank.

“The fish was motionless and I told the woman that I thought he was dying. ‘No, she replied. ‘It’s been like that for two years.'”

McArthur makes us see and feel the disconnection and distance created by our treatment of animals as objects of commerce.

“With the investigations I’ve been part of, it’s been disturbing to me how close these fur farms are to the natural habitat of the animals inside them. In addition to the putrefaction of their own waste they stand over the mink, raccoons and foxes can smell and see the forest, just beyond their reach. That proximity feels particularly perverse and cruel. You can see it everywhere in this book: an aquarium located by the sea, dolphins performing in sight of the ocean; a pig held in a gestation crate that’s separated by a brick wall from fields in which she’d root and nest; or a window that separates tens of thousands of hens from the dirt they’d bathe and scratch in for insects.”

In the introduction to the book, McArthur describes her process of honing her photography skills. It’s inspiring to read how she developed her art, how her mentor asked her, “What’s your point?” and she went on to find it making a niche out of photographing imprisoned animals and their advocates. It’s also intriguing to travel with McArthur around the world and glimpse her vast experiences. It’s purposeful and enviable work, but also clearly work. She describes how she obtained each picture, bore witness to suffering, smelled blood and feces, and shot photos in darkness and secrecy.

We need to see these photos. They illustrate how the imprisonment of animals works against us and confines us all. While the animals bear the brunt of the suffering, everyone pays a price. We animals, all, are forced into smaller spaces, constrained roles, and stunted lives. What we do, we do to ourselves.

The final chapter of the book entitled “Mercy” shows animal activists and animals at sanctuary and offers some hope.

What next?
Watch Liz Marshall’s documentary The Ghosts in Our Machine (2013), which follows McArthur’s work over the course of a year.

Read also Veganomics (2013) by Nick Cooney of The Humane League, which provides researched-based tips on animal advocacy and urges vegetarians to speak up in effective ways for the animals, who cannot speak for themselves.

Inspired by this book?
Check out Toronto Pig Save and Save the Chimps.