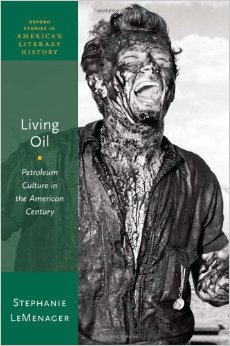 Living Oil: Petroleum Culture in the American Century by Stephanie LeMenager  is an academic book and priced accordingly.

In other words, this is not the sort of book you’d find in an airport bookstore.

Perhaps it should be.

This book provides historical and cultural insights into our complex relationship with oil — from the “peak discovery” period of the early 20th century to the “tough oil” period of today — in which oil is tougher to extract, with more environmentally severe consequences.

The book is divided into loosely chronological sections that span from “Origins, Spills”  to “The Petroleum Archive” — in which the author visits oil museums in Los Angeles, Texas, and the Alberta Oil Sands region. Yes, there is an actual Alberta Oil Sands Discovery Centre that the general public can visit, and I now feel a strange urge to go see for myself.

And, yes, the author is well aware of the irony of consuming oil in an effort to write about oil. She also notes oil’s role in the entertainment industry and the publishing industry, and she even calculates the energy consumed to print her book.

LeMenager begins in 1969, when an oil spill off the coast of Santa Barbara awoke many Americans to the negative side effects of our oil addiction. Video footage and photos of oil-stained birds and sea lions gave momentum to the growing ecology movement, and many environmental laws soon followed, as well as the first celebration of Earth Day in 1970.

But how does one resist oil when one is so dependent upon it?

That is one of the central issues the book raises. This book excels at raising issues, making connections, and at illustrating just how relatively brief our love affair with oil has been. We use the word “addiction” now, but oil was once the fuel that led the country into the modern age.

And it should be noted that the discovery of oil as a fuel source helped save the whales from extinction (an earlier energy source). Moby-Dick is very much a novel about a dying industry.

LeManager writes extensively about Los Angeles — at one point the source of 20% of the world’s oil and, years later, a seemingly endless source of smog. She writes:

When the complexity of an effective smog abatement treatment became clear, smog grew from the status of an “attack” or “atmospheric freak” to a regular “season.” The season was September, southern California’s late, hot summer. In fact, smog is oil weather, like the industrial fires that were originally named as such by oil-field roughnecks. Initially the industries targeted by antismog activism argued that smog could not be a legal matter precisely because it was weather…

My own relationship with oil was forged in the 1970s, during the oil crisis, when I can remember massive gas station lines, and gas rationing was a brief way of life. But addictions are hard to break, particularly if most people would rather pretend they don’t exist.

Which brings us to today — a period of time that LeMenager calls “petromelancholia.”

She writes of the significance of Hurricane Katrina and the BP blowout in contributing to our current mental state:

We learn from these two events on the Gulf Coast of the southern United States not only that modernity and ecology are entangled objects, to paraphrase the philosopher of science Bruno Latour, but also that the melancholia for a given nature that has characterized modern environmentalism might be eclipsed, in the twenty-first century, by an unresolvable grieving of modernity itself, as it begins to fail.

This book has led me to many more books to read and artists to seek out, and makes me wonder if we will ever break our addiction, or if our addiction will ultimately break us.