Ann Pancake’s powerful novel Strange as This Weather Has Been is a must-read not only due to its compelling story but also its accomplishments as a work of eco-literature. This novel captures what a good book does best—revealing our humanity in the midst of beauty and grief and heartbreak and joy—while simultaneously opening readers’ eyes to environmental disaster, without ever sacrificing character or story. 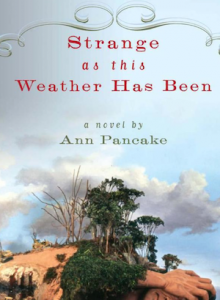 Set in a West Virginian town in the midst of a coal boom, Pancake introduces a family plagued by poverty and by the effects of the mountaintop removal strip mining that is destroying the land around them. Told through the eyes of several characters living amid the ruinous effects of coal mining—which early on felt a bit cumbersome, as the book also jumps around in time—this story belongs mostly to Lace and her teenage daughter, Bant, born when Lace herself was a teenager. Through their eyes and others, the novel vividly portrays the daily struggles of those who live amid mountain-removal coal mining: the constant fear of black floods weighed against a desperate need for work, the memories of what once was versus the wasteland that now exists. Lace and Bant, deeply connected to the land, feel these effects more strongly than most, in their very bones.

Pancake, who is from West Virginia, writes with a stunning authenticity; the book draws from conversations and interviews with people living through mountaintop removal mining, and she’s dedicated this book to them. “Nowhere have I seen courage and integrity like theirs,” she writes, and this spirit is reflected in each of her characters.

Place, too, is a major character in this novel; the richness of detail and the characters’ history with the land reveals why it’s so hard for them to leave, even when the jobs begin to disappear and the threats loom everywhere, from within the coal miners’ lungs to in the flooding of toxic black water.

At one point, the family does leave, temporarily, when Lace’s husband, Jimmy Make, gets a job in Raleigh, North Carolina. Despite the necessity of the move, she misses home: “Down there, I learned fast, you couldn’t ever really get outside. Couldn’t even get in trees, in brush, much less get into hills, you weren’t ever out of sight or sound of a road, a building, a parking lot, and sometimes I’d miss backhome woods so bad I’d feel land in my throat.”

Lace also notes “… it wasn’t just the lack of money that made us poorer in North Carolina. It was what you saw around you, what you had to compare yourself to, and I’d never understood about that before…Somehow people knew we were different from them, even before we opened our mouths, although I couldn’t for the life of me see how we looked much different from anybody else…It was that smallness North Carolina made me…I got a whole lot littler.”

Yet back home, tensions escalate both within the region as more blasting continues, and within the family as Lace becomes involved with anti-mining activists and Jimmy Make resists. Meanwhile, the couple’s younger sons—Dane, Corey, and Tommy—each deal with the landscape and the anxiety in his own way: “Sad dark Dane”; “Corey a flame, a push, a glow”; “Tommy growing up poorer than the others had to, Tommy growing up poorest of us all, and him not even knowing any different.”

When Bant, who takes after her mother in passion and intensity—“Little sister, little friend,” Lace calls her—sees the mountain in whose shadow she’d grown up in destroyed, it affects her deeply: “What I saw punched my chest. Knocked me back on my heels. At first I saw it only as shades of dead and gray, but I pushed my eyes harder, I let come in the hurt, and then it focused into a cratered-out plain. Whole top of Yellowroot amputated by blast, and that dragline hacking into the flat part left. Monster shovel clawed the dirt, and you felt it in your arm, your leg, your belly, and how lucky Grandma died, I thought. I thought that then.”

Strange As This Weather Has Been succeeds beautifully not just as the unforgettable story of a family, a region, a culture; the novel indirectly asks readers think about where their power comes from, and what the costs of coal truly are. Though not didactic—we’re never brought out of the story—Pancake has written a book we can hope will raise awareness about mountaintop removal mining and the lives affected by it. As Lace says in the novel: “Stay in their way—that’s the only language they can hear. We are from here, it says. This is our place, it says. Listen here, it says. We exist.”