In a new book I’m just crazy about, The Book of Barely Imagined Beings, a 21st Century Bestiary by Caspar Henderson, given to me by Chris of the wonderful Longfellow Books in Portland, Maine, there is a shout-out to my favorite one-celled algae, the diatom. It is a crusty bit of plankton, a broad category that embraces any living thing that allows itself to be carried by the current. The diatom is not found under D in the book (that is taken by Dolphin), but under S for Sea Butterfly, a mollusk the size of a lentil. Sea Butterflies feed on plankton  and are in turn eaten by many species of fish, including human’s favorite, cod and salmon. And if you have eaten that health food staple, spirulina, then you have by-passed the Sea Butterfly and the salmon and consumed plankton directly. Yum!

Diatoms and spirulina are not any old plankton, but phytoplankton, which means they use sunlight to fix carbon dioxide, like a ficus tree or a head of lettuce. All phytoplankton live in the upscale euphotic neighborhood, the top layer of the ocean where the sun still shines, allowing the magic of photosynthesis to occur. Phytoplankton might be small, but they are big in numbers. Their total biomass is greater than that of all other marine animals combined. Let me say that again: Combined. These single cells are the first course of the underwater food chain, and any change in their health is a change in the entire ecosystem, of which we form a part.

A diatom has a wall, like a shell. After the diatom has wolfed its share of carbon dioxide from the water, absorbed from our heavily carbonated air, it dies a natural death and sinks to the ocean floor, taking the carbon with it, which helps cool the atmosphere. The dead diatoms form a chalky powder called diatomaceous earth, a staple of organic gardening. The powder is smooth to human touch, but there are microscopic sharp edges from the shells, and a slug will not cross it. Who knew a slug was so sensitive? Sprinkle it around your lettuce and find out. I have used it to great success for years. There are 100,000 living diatom species (my novel, Float, features an extinct species, of which there are even more), and each one has a different shell, and a distinctive name, including The Fathead Congregant, the Ant-like Bestback and the Pot-bellied Gravyboat. Marine biologists must crack each other up. You can get a look at some of these at the Museum of the History of Science in Oxford, England.

The trouble is, living diatom shells are dissolving from acidification of the seas. The more carbon dioxide we pump into the air, the more gets absorbed by the oceans, making it acidic, which kills off the diatoms. All these years, they have been dutifully sucking up half of our carbon emissions, keeping the air cooler than it would be otherwise, and this is how we pay them back. The last time the oceans were this acidic was 55 million years ago, during the Paleocene-Eocene Thermal Maximum, when massive amounts of carbon dioxide, probably from volcano spew, entered the atmosphere, causing mass extinctions. This cleared the playing field for primates (who were then the size of mice) to grab a toe-hold on Earth. The next big round of extinctions could shake us free, and you can bet the planet and any surviving species will be happy to be done with us.

As if acidifying the sea isn’t enough, humans are replacing plankton with plastic, which, instead of decomposing, breaks down into plankton-sized fragments, fooling the Sea Butterflies into thinking it’s a delectable morsel. Between the acid and the plastic, there is a worldwide reduction of phytoplankton. No phytoplankton, no Sea Butterfly, no salmon, and eventually, no us. Our existence depends on keeping it healthy. As Henderson says, ‘If we fail, the oceans may recover their beauty, diversity and productivity thousands to millions of years hence, but humans are unlikely to be around to see their regeneration.’ 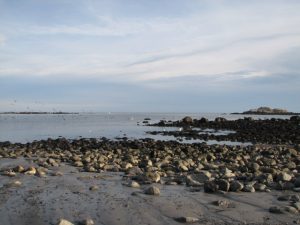 Here are more Sea Butterflies by Smithsonian photographer Karen Osborn. See them while you can.