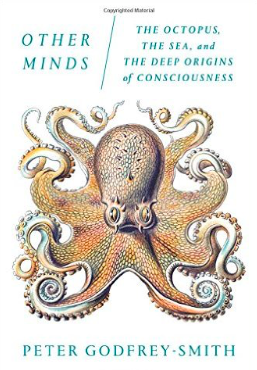 Peter Godfrey-Smith has a passion for cephalopods, the class of sea animals that includes the octopus, cuttlefish, and nautilus, among others. Animals that among the oldest creatures on this planet.

Measured in numbers of neurons, the octopus has the largest brain of all invertebrates. Its eyes are remarkably similar to ours. And, like us, the octopus can unscrew jars, recognize faces, plot creative escapes, and generally make plenty of mischief.

Their ability to change colors is hard to fathom. And nobody has fully cracked the code for what all those colors and patterns mean. Darker colors tend to signal aggression; an octopus will turn black when attacking another. But often it seems the light show is occurring completely on its own.

Godfrey-Smith devotes about half of the book exploring the evolution of sentience, which I found the least interesting aspect of the book. Then again, it’s hard to compete with an octopus. What I most enjoyed about the book were his experiences with them in their environment. Peter spent a great amount of time off the coast of Australia at a place known as Octopolis because it was home to so many of these creatures. Witnessing their interactions, their soap opera lives, and the tragic briefness of it all — they only live a few years — is by itself good enough reason to read this book.

What’s sobering about this book is learning about the many scientific tests conducted on these creatures, some using electric shocks. Fortunately, these animals now receive a degree of protection as “honorary vertebrates,” but that doesn’t save them from the prison of tanks.

What’s nice about this book is how it places the reader underwater with these amazing creatures, hopefully, encouraging readers to consider what they can do to protect them. Giving up on calamari (and all seafood) would be a good start.

Peter Godfrey-Smith has a passion for cephalopods, And by the end of this book I suspect most readers will as well.

Other Minds: The Octopus, the Sea, and the Deep Origins of Consciousness