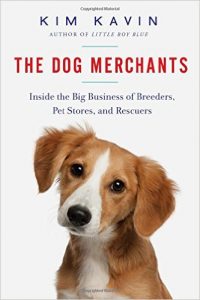 Most dog lovers consider their canines loyal companions, best friends, or beloved family members. (Count me in that last category.) The American legal system considers them property. Journalist Kim Kavin, in her new book, The Dog Merchants: Inside the Big Business of Breeders, Pet Stores, and Rescuers, suggests that we view dogs in a more provocative way—as products, not unlike the chicken and steak, veal and pork, that line “that big case of meat in the supermarket.” After all, she tells readers, some thirty million dogs are bought and sold each year, in what is estimated to be an $11 billion-a-year global marketplace.

The Dog Merchants is not Kavin’s first foray into the business of dogs. She began digging into the issue for the book Little Boy Blue, which focuses on America’s taxpayer-funded animal shelters and the burgeoning rescue movement. What she learned doing that research inspired her to look beyond shelter dogs to the myriad ways dogs are sold worldwide, be it by breeders, pet stores, animal shelters, rescue groups, or dog auctions. In all of these transactions—whether they are called purchases or adoptions—dogs are exchanged for dollars. And all those dogs exchanged for all those dollars add up to an industry the scope of which is larger than most dog lovers realize and that goes virtually unregulated—too often to the detriment of the dogs.

In researching The Dog Merchants, Kavin’s mantra was follow the money, so among the places she takes readers is the largest dog auction in the United States, where both breeders and rescues bid on purebreds. The breeders, of course, bid for dogs they want to breed and sell. The rescues bid for dogs they want to keep from being bred. In the end, their bidding drives up the cost of each dog.

Kavin also goes behind the scenes of the 138th Annual Westminster Kennel Club Dog Show, where Sky, the winning Wire Fox Terrier, is “a dog in whom wealthy people owned shares, like a corporation.”

In the introduction, Kavin says she’s not on the side of the breeders or the rescuers—“I’m on the side of the dogs”—but breeders and buyers of dogs bred for shows like Westminster, where judging focuses solely on appearance, receive Kavin’s harshest scrutiny. That scrutiny, however, is well deserved. Modern dog breeds, which date to 19th century England, were bred for looks not temperament. The ramifications of that kind of breeding, which continues today via the breed standards propagated by kennel clubs, leaves dogs at risk for birth defects and genetically inherited health problems. Indeed, Kavin reports that a British study found inbreeding in ten popular breeds, including Boxers, German Shepherds, Golden Retrievers, and Labrador Retrievers. And then there’s this striking factoid: The 2003 winner of Britain’s version of the Westminster dog show, a Pekingese named Danny, suffered so badly from a breathing problem common to dogs bred to have flat snouts that he’d undergone surgery to help him breathe and to cool himself. Kavin writes, “Anyone who looks closely at some of [Danny’s] winning photos … will see that he had to be placed on an ice pack while posing next to the trophy, so he wouldn’t overheat before the photographers were done making him a star, one who would now be in demand worldwide as a stud to breed more dogs just like him.”

The idea of dogs as products—and dog owners as consumers—may strike some as objectionable, but Kavin, herself a long-time dog-lover and dog owner, says it shouldn’t. Rather, she argues that viewing dogs through an economic lens gives dog lovers the clout to force the multi-billion-dollar industry to raise standards. “I believe that no matter how much all of us love our pups, thinking of them as products—just like so many of the sellers do—is the only way we can truly change the dog industry for the better.”

To help consumers make smart decisions about future pets, Kavin includes questions want-to-be-dog-owners should ask before buying from a breeder or adopting from a shelter or rescue. She’s also created a companion website, dogmerchants.com, where dog owners can research and review breeders and rescues.

Kavin’s bottom line is this: Dog lovers don’t need to be involved in dog rescue to make a difference in dogs’ lives. (Though, of course, if you have time to volunteer, shelters and rescues are always looking for the extra help.) What dog lovers need to be is smart shoppers, because only through the collective power of our purchases can we begin to demand the kind of treatment all dogs deserve.