How Animals Grieve is an important book about the inner lives of animals.

In April, author Barbara King was kind enough to answer of a few of my questions about the book and what inspired her to write it and how people have reacted to it so far.

If you haven’t had a chance to read the book yet, please add it to your “must read” list. 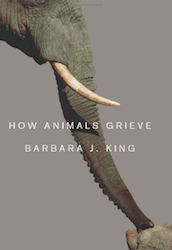 What inspired you to write this book?

It was the animal themselves who inspired me, as I gradually began truly to see the grief that may sear a survivor when death steals a loved one away. Elephants, apes, and dolphins, horses, rabbits, cats, dogs, some birds—depending on individual personalities and circumstances, all of these creatures (and more) tell us through their actions how profoundly they feel their lives.

In writing two of my earlier books, I started to find hints of animal mourning in the scientific literature. So I settled down to answer in How Animals Grieve the questions that compelled me the most, about the scope of animal grief, what does and doesn’t credibly count as grief, what animals’ grief means for our connection with other species.

I was particularly moved by the story of the two ducks Kohl and Harper. What story moved you the most?

Kohl and Harper opened my eyes wide. These two ducks, fragile in body and spirit after their rescue from a foie gras factory, formed an unshakable bond at Farm Sanctuary in New York State. Fast friends, they spend their days together. When Kohl was euthanized to spare him untreatable pain, Harper was allowed to watch. The only word for his response is “heartbroken,” not only on that specific day but for weeks. He never did recover. How many of us think about ducks in this light, as experiencing such bonds of friendship and loss? I hadn’t, but I do now.

An equally moving story for me was about Willa and Carson, two Siamese cat sisters who lived together for 14 years, at the home of good friends of mine. The sisters ate and slept together, enjoying sun patches and warm blankets as a pair. Carson developed some health problems, and one night was settled into a warm incubator at the vet’s office for treatment. She never woke up. At first, Willa seemed mildly distressed. Then she began seek out her sister in all their favorite places: as she roamed the house, she would pass by one of those favorite places and let out a keening sound. She was terribly sad, for a long time.

In each case, I find solace in thinking not just of the sadness, but also of the strong love that linked Kohl and Harper, and Willa and Carson—and knowing that in each case, loving humans surrounded the survivors and gave them as much comfort as they could.

Have readers contributed stories as well that you could share?

Oh yes. I’m slowly reading and responding to emails, because it’s an honor when people want to tell me about their own animals. This topic matters to people who love animals.

I will share a dog story from Cristina Chuecos who sent it to me by email last month. For almost a year now, Cristina’s 8 year old shih tzu, Milou, has been grieving for his friend Cobi, the older dog in the household who died at age 14 The two lived together for 7 years. Once, when Cobi needed surgery and was away from home, Milou’s distress was so great he would only eat when hand-fed.

When Cobi went into kidney and heart failure, his human family knew it was time to help him. Thus they left home, for the vet’s office, with Cobi and came home without. For a few days, Milou looked for Cobi but then he underwent what Chuecos calls “a deep personality” change from his usual upbeat demeanor, a change that persists. “Milou now spends his days sitting in the same spot, looking in the same direction, as if he was looking out a window,” Chuecos wrote me. “We have a three floor townhouse, and in every floor he sits in the same area, looking at the same spot. Occasionally he whimpers or growls. He is has been standing alert for hours at a time, looking at the same spot. I recently moved his bed to that area, so that at least he can lie down, and he has started taking breaks in what appears to be his watch. He only relaxes completely when we bring him up to lay down next to us on the sofa.”

Chuecos detailed for me a number of things she has tried in her efforts to help Milou, who is lucky to have such a loving and supportive caretaker. Milou’s sadness has perhaps eased somewhat, and I hope he will regain some of his previous joy in life.

You talk about the importance of allowing time for animals to grieve their dead companions. What additional recommendations would you offer to humans to help animals when one of their companions moves on?

I’m so impressed by the sanctuaries, farms, and zoos that encourage animal survivors to spend a bit of time with the body when a relative or friend dies. That’s a very enlightened approach. Although from my research I found that this helps only some survivors, it’s definitely worth a try. In terms of our companion animals, many—but again not all– respond with a fairly sudden uplift of emotion if a younger animal is brought into the home, after an appropriate time for quiet sadness. This strategy won’t be practical for everyone, but even occasional visits from “a therapy companion” to a grieving animal may help. Love and time are the best emotional medicine, as they are for people too. The thing to remember is that animals vary individual by individual, just as we do—some may not grieve at all.

What animals did you wish you had covered for the book but simply ran out of time or space or both?

The study of animal grief is so new that credible cases—those either published in the literature or offered by astute “animal people”–are still relatively few. I’m hoping that How Animals Grieve may help change that: a database of examples is now emerging due in part to the book and in large part also to scientists who more and more record animals’ response to death at their field or captive research sites. That said, I have an article to come out in the July edition of Scientific American magazine (on the stands in June) that includes a stunning example of giraffe grief that I became aware of after the book went to print.

As people become enlightened about animal grief, do you see any positive developments regarding animal welfare in general?

Yes, I do. As we come to know that many other animals love and grieve, we will, I believe, see them as creatures whose lives matter in their own right. How could we not, then, work to end the practice of using chimpanzees, cats, rabbits or other animals in biomedical laboratories? Of asking dolphins and whales to endure life in small tanks and to entertain us in shows? Of eating animals without a thought to the cow who gives birth but grieves when her babies are taken away for slaughter time and time again? We’re in the midst of a sea change in how we think and act towards animals.

How has the writing of this book changed your own relationship with animals?

I’ve always felt close to certain individual monkeys or apes whom I have observed or filmed or spent time with, and with our own (very many!) rescued cats. Now my sense of connection to animals has rippled out in an unexpected way. The tree in our front yard frequently hosts a raucous group of crows, and from what I have learned about corvids I now realize when they chatter, they’re expressing something (I’ve no idea what specifically) about their tight network of bonds. And during the writing of this book I stopped eating chicken and turkey, adding to my already-in-place practice of eating no beef, lamb, veal, or pork.

What’s your next writing project?

An exciting change in my life is underway: I’ve become a part-time freelance science writer. This year and next year, and perhaps beyond that, I am teaching only half-time in order to immerse in more writing. The College of William and Mary, where I’ve taught Anthropology for 25 years now, has been supportive of my efforts at public engagement through science. Now, I have the best of both worlds: in fall semester, I’m paid to teach a fabulous group of undergraduates about biological anthropology and primate behavior, and during spring semester through the summer, I’m making a go of it as a freelancer. At present, I’m busy with articles for science and literary magazines, and just barely starting a new book about animals, with a chapter underway about octopus. It’s too early to say more, but I’m blown away by octopus cognition and emotion! 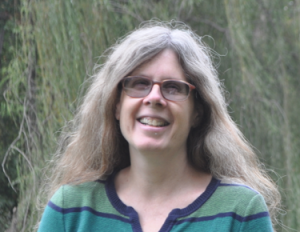 Barbara J. King has taught Anthropology at the College of William and Mary since 1988. Originally focused on primate studies through her observations of wild monkeys in Kenya and captive apes, she now takes up intelligence and emotion in a wide variety of animals. She writes for NPR’s 13.7 Cosmos and Culture blog and the TLS. In Gloucester County, Virginia, she lives with her husband and many cats. Besides cat rescue, she enjoys attending her daughter’s college choral concerts and reading as much fiction as possible. Her website is www.barbarajking.com