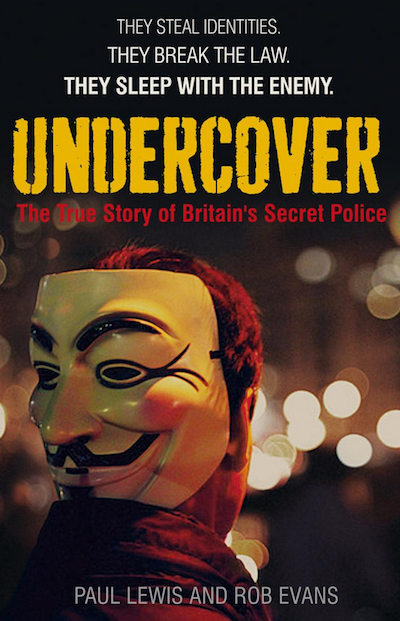 So what is this book doing on EcoLit Books?

Let me first back up about five years. I was researching my novel The Tourist Trail, wondering to what extent law enforcement agencies had tried to infiltrate animal rights groups. I had heard firsthand of an attempt of the FBI to infiltrate The Sea Shepherd Society, and I had come across several documented cases of the FBI “flipping” activists to turn on one another. But I came across little concrete evidence of undercover agents working for extended periods of time as activists. I felt confident this sort of thing was indeed happening — so I ran with it in my book — but it was mostly “fiction.”

Across the pond, it appears that this sort of activity is all too real.

A few years ago, news broke about an undercover police officer who had not only infiltrated an animal rights group but had a child with one of the activists.

This story — and many others — is included in this troubling book: Undercover.

Journalists Rob Evans and Paul Lewis have written a book that is very much hot off the press. And, according to the authors, undercover agents are still embedded in activist groups.

In 1968, in response to growing concerns over anti-war protests, the Metropolitan Police created the Special Demonstration Squad — intended to send agents undercover for long periods of time. Targets included the animal rights movement, anti-racism movement, climate change protestors — anyone that fit under the “domestic extremism” category.

My focus is on those officers who infiltrated the animal rights groups.

In 1983, the SDS began targeting animal rights organizations. Much of this book is devoted to officer Bob Lambert, who for years portrayed an animal rights activist, going so far as to help write an anti-McDonald’s brochure that led to the longest civil libel trial in English history (McDonald’s lost). He also fathered a child with a fellow activist, only to disappear years later after the child was born and his assignment concluded.

The authors identify 10 undercover police officers and estimate that there have been more than 100 in action over the past four decades. Some of the stories are rich with irony. For example, at one point an activist group was close to disbanding due to attrition of members. However, the addition of an undercover agent and a few undercover investigators hired by McDonald’s (yes, McDonald’s) convinced the members to keep going because they were under the impression they were adding new members. I don’t know if this qualifies as entrapment, but there are more than a few stories that most certainly do. The undercover agents were helping to fund operations, offering activists rides to protest and action sites, and egging activists into getting more radical.

Interestingly, a few of the police officers, after their assignments ended, often struggled to leave their fellow activists behind. Mental breakdowns were a common problem, understandable since so many men were not only living double lives but were involved in multiple romantic relationships.

Also noted in the book was the growth of a database of named activists — a database that I’m sure has expanded exponentially as the intelligence community has tapped social networks and email providers.

Lines that I once believed the US or the UK wouldn’t cross I’ve since come to believe are crossed so frequently that they don’t really exist anymore.

There are so many tragedies in this book. The stories of women who were lied to by men paid to lie to them. The activists entrapped by undercover agents who literally urged them into direct action. The phenomenal waste of taxpayer money.

But more than that, it’s a tragedy for the animals. For the planet.

I’m not saying activists are all saints; they aren’t. But the surveillance industry has grown so pervasive, so well financed, and so aggressive that it has turned all activists into “terrorists,” and every protest is suddenly a cause for undercover activity. And it is ruining what makes democratic societies so vibrant — the freedom to protest, to speak out, to believe that individuals can make the world a better place.

PS: You can learn more on a Guardian website devoted to the book.